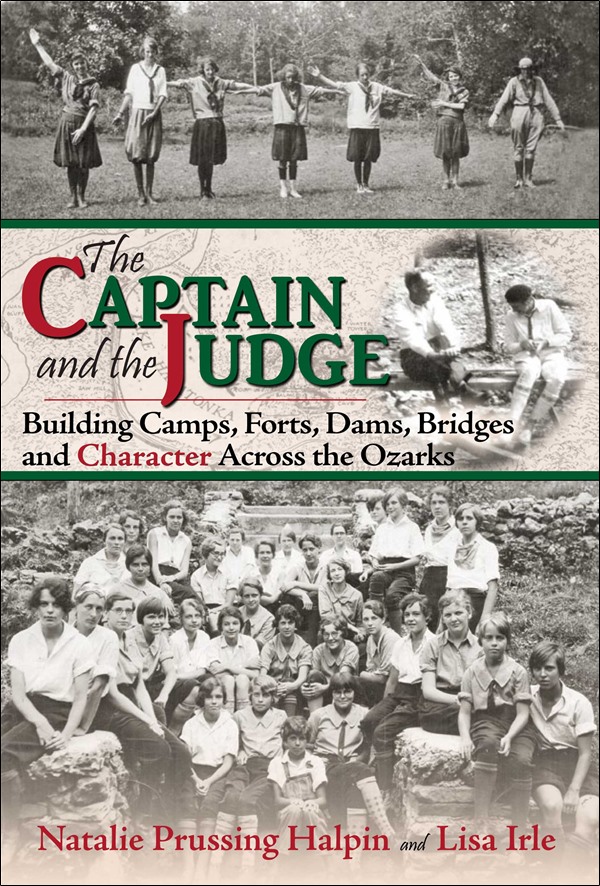 Captain and the Judge, The

Building Camps, Forts, Dams, Bridges and Character Across the Ozarks

FOR TWENTY-FIVE YEARS, from 1917 until 1942, Camp Carry-On provided a wilderness retreat for girls every summer. Located in Camden County (and later Mountain View), Missouri, the camp taught a variety of physical and character development skills outdoors to girls of all ages, under the direction of Captain Natalie Wilson Prussing, also known as “Captain Nat”. Surviving several transitions, growing and moving as dams flooded once wandering streams, Camp Carry-On provided lasting friendships, with reunions held decades later.

Nat’s friend, Max Prussing surveyed the Bagnell Dam site, built camps and, as commissioner, designed the new town of Camdenton during southern Missouri’s genesis as an energy producing, recreational playground.
The Captain and the Judge – Building Camps, Forts, Dams, Bridges and Character Across the Ozarks tells the story of Camp Carry-On and the lasting love between Nat and Max, later known as “Mr. Fort Leonard Wood”, the chief civil engineer managing that Army base until his retirement.
Read The Captain and the Judge and learn about the first camp for girls in the Ozarks, the creation of “the Lake” and the fascinating lives of this couple who influenced so many!

The Captain and the Judge is an interesting and important story about Natalie Wilson—the Captain—who established Camp Carry-On in the Ozarks for girls and young women from 1917 to 1942 and who later directed the Girl Scout camp at Knob Noster State Park from 1949 to 1952. The book also details the life of Judge Max Prussing, who married Wilson in 1935 and who later served as a county official in Camden County and, more importantly, as the engineer who oversaw the construction of Fort Leonard Wood. The book makes an important contribution to the existing literature on how the Ozarks became a destination point for outdoor recreation in the first half of the twentieth century and how the Ozarks continued to develop as a recreational destination point.
-Jon E. Taylor, Ph.D., University of Central Missouri, Professor of History

I just love your book!   There are no words to express how much I enjoyed reading it.  What a wonderful history…. JUST INCREDIBLE! The “girls” (59 and 61 years old) were so amazed, with comments like “how did we not know this.”  What a wonderful trip down memory lane.

I sat down and read the whole book in one sitting.  Loved it!   The stories of the generations that preceded us help us understand who we are. Kudos to Lisa and Natalie for sharing the stories and images of Max and Nat and their commitment to hard work and making the world a better place.
-Mike Greife, retired editor and writer

Natalie Halpin’s The Captain and the Judge offers a fascinating trek through the period in which her parents worked in widely divergent ways to enhance Missouri lives.  The creation of the Bagnall Dam, the town of Camdenton, and Fort Leonard Wood come into play in the skillful hands of Max Prussing; likewise, Natalie Wilson (later Prussing) fashioned a more healthful and multi-faceted life for the many young women who flocked to her camps in the woods.  Over decades the Prussings fostered community and individual betterment without fanfare or plaudits.  Read all about it.
-Virginia Hudson Young, PhD 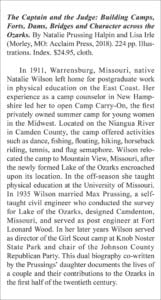