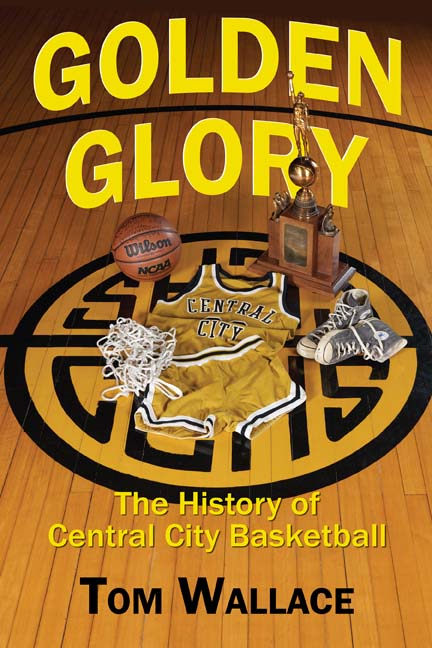 The History of Central City Basketball

WHEN CENTRAL CITY HIGH SCHOOL closed its doors in 1990, its boys’ basketball teams had won more games than any school in Kentucky, and it had the second-most wins among all high schools in the United States. From the early 1920s, when records were first kept, thru to 1990, Golden Tide teams won 1,578 games and lost 588 for a 72.9 winning percentage. There were 17 30-win seasons (still the most among Kentucky schools), 51 20-win seasons and 17
trips to the state tournament.

Those are remarkable numbers by any set of standards. But how was this small school, which rarely had more than 50 students in a class, able to sustain such long-term excellence? Why did Central City continue to perform at the highest levels while other schools soared high for a few years and then fell into obscurity? What was the secret behind this school’s winning ways on the basketball court? What was the genesis of the Golden Tide’s great tradition?

The answer is two-fold. First, from 1925, when George Taylor arrived on the scene, until the final whistle blew in 1990, only six men served as head coach. is continuity of coaches played a key role in the Golden Tide’s success. Taylor, the father of Central City basketball and the founder of its great tradition, established a standard of excellence that his successors were challenged to match. And to a man, they all succeeded.

Second, no basketball team can be successful unless it has talent, and down through the years Central City certainly had more than its share of superb players. The two towering figures in Golden Tide history are Bernard “Peck” Hickman, who would go on to become the Hall of Fame coach at the University of Louisville, and the legendary Corky Withrow, a first-team All-America selection who is still regarded as the greatest player in Central City and Muhlenberg County history.

Beyond those two there were dozens of other players whose on-court exploits helped the Golden Tide rack up victories year after year, decade after decade. Some were supremely gifted athletes, some were tough in-your-face players, while others succeeded by effort, intensity and sheer force of will. Regardless of the talent level, each of them wore the Golden Tide uniform with great pride.

Those wins didn’t come cheap or easy. The Golden Tide consistently squared off against the best teams and a Who’s Who of talented individual opponents, including such giants as Wah Wah Jones, Ralph Beard, Cliff Hagan, Frank Ramsey, Don Mills, Harry Todd, Butch Beard, Tom Payne, Rex Chapman and “King” Kelly Coleman. And that’s not even counting the many Muhlenberg County foes Golden Tide teams had to deal with, a lengthy list headed by Greenville’s great Roger Newman.

In Golden Glory, Tom Wallace, an award-winning sportswriter and Central City native, gives us an in-depth look at the magnificent Golden Tide history. Through success on the basketball court drives the narrative, at the heart of this book are the individuals—players, coaches and opponents—who bring the story to life. By combining facts, legends and tall tales, Wallace takes us behind the scenes of a storied basketball program that thrived during an era that, sadly, no longer exists.

“In the not-so-distant past, high school basketball in Kentucky was king, and one of the schools that ranked among the elite was Central City. So successful were teams from this small coal-mining community in Muhlenberg County that when the doors closed in 1990, it had more wins than any school in the Commonwealth. This terrific book by Central City native Tom Wallace recalls the exploits of the players, coaches and opponents who wrote the story, while reminding us of an exciting era when high school hoops really mattered.”

“Having gone up against Central City many times when I was at Bremen, I can attest first-hand that succeeding against them was never easy. We won some and we lost some, but every game was a fierce battle. That high level of competitiveness was the one constant when the two schools met. You have to play your best if you hope to beat the best, and Central City was certainly one of the best.”

“Tom Wallace knows a good story when he hears one, and when he hears it he likes to write about it. That’s exactly what he’s done with Golden Glory. For most of his life, Tom, a 1964 Golden Tide graduate, has been a part of this incredible basketball story. His insight and fiery passion makes him a natural to tell the story of Central City’s path to becoming one of the winningest prep basketball programs, not only in Kentucky, but America. For years the stories have come in bits and pieces, but now, thanks to Tom, they have been brought together for all hoops fans to enjoy.”