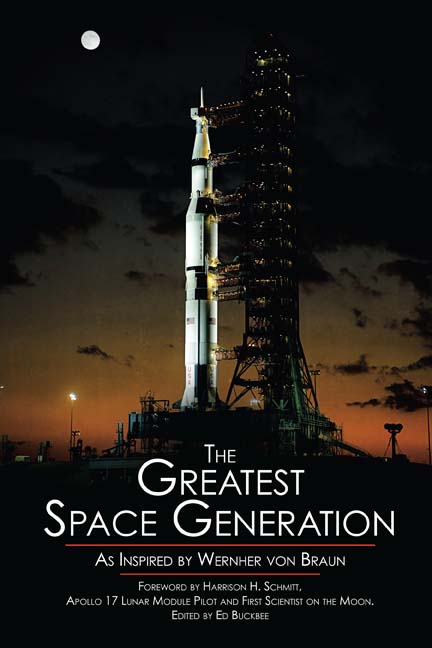 The Greatest Space Generation is the story of the scientists, engineers, managers, and skilled workers who created the Saturn rocket—a magnificent space machine—to take American astronauts to the Moon. It’s about those who came to Huntsville, Alabama, because of the work underway at Redstone Arsenal and later, Marshall Space Flight Center. They were the trailblazers for both missile defense and peaceful exploration of outer space.
These pages reveal what it was like to be a rocket scientist working on cutting edge technology in space sciences, guidance and control, fabrication and quality control. Engineers who conducted the fire-and-smoke test firings at the Marshall Space Flight Center recount how they made it thunder in Rocket City. Some will describe what it was like to work or grow up with rocketeers. Others will reflect on their career and what the rocket program gave in return. It took German vision plus American initiative to beat the Russians to the Moon.
The Moon landing, widely acknowledged as the single most important technological achievement in the 20th century, launched a new economy in Huntsville. Investments in the University of Alabama in Huntsville and Cummings Research Park yielded technology-rich companies and smart people to support the space program. Public outreach through the U.S. Space & Rocket Center, opened in 1970, and its hands-on Space Camp® program, which debuted in the early 1980s, encouraged the state and nation to consider, “What’s next?”
Manned spaceflight will always be a testament to mankind’s capacity to imagine, create, explore and grow. The Moon was the first, but far from the final, destination. Will there ever be a generation to match the speed, courage and passion of the Apollo days? Only time will tell, but without a doubt, America will stand on the shoulders of the Greatest Space Generation to step foot on Mars and beyond.