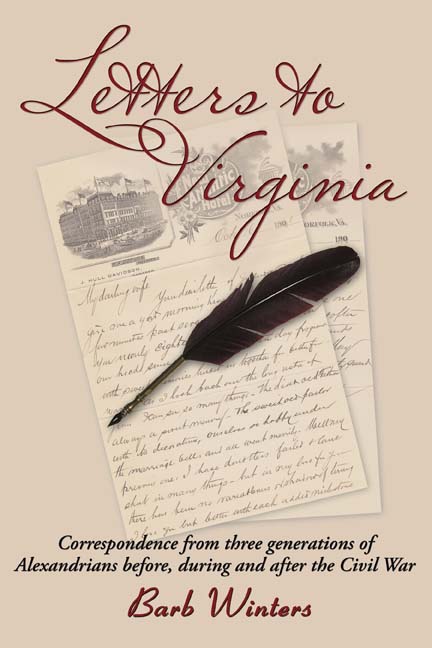 Correspondence from three generations of Alexandrians before, during and after the Civil War

HURRY, NOW 75% OFF WHILE SUPPLIES LAST

The true story of three families who lived in Alexandria, Virginia from before the Civil War to after World War I. It is an intimate tale of their lives, told by them through hundreds and hundreds of handwritten letters they left behind, uncensored and unread until the 21st century. It is, in effect, the diaries of their daily lives and loves, struggles and accomplishments. It reflects what life was like during those times in America.

In today’s world of instant messaging, letters are becoming obsolete. People are communicating more than ever, but via email, cell phones or other electronic devices. One hundred years ago, hand-written letters were the only way friends and family could stay connected.

When a box of over 800 letters and memorabilia were donated to the Local History/Special Collections Department of the Alexandria (VA) Library in 2000, historian Barb Winters painstakingly organized and arranged these letters, and compiled them into this book for all to enjoy.

Compiling almost 125 years of history, Letters to Virginia is a collection of letters that will fascinate future generations.

Read Letters to Virginia: Correspondence from three generations of Alexandrians before, during and after the Civil Warand discover the love and larceny, triumph and tragedy they knew as told by them through hundreds of personal letters. Here, 15 people share their private lives and their hopes and fears, while drawing the reader into their interpersonal relationships from 1817 to 1940. They tell of war and deadly disease, fleeting fame and fortunes, deep devotion and cruel deception – the same things we experience today.

Meet the Eaches, Fendalls and Tacketts, originally of Alexandria, Virginia, whose letters contain:

…plus other descriptions of daily life, love, and emotions from a typical family of long ago.

I read and skimmed parts of Letters to Virginia on the metro train!  Wow, you did a lot more than collect letters.  I can’t imagine all the work that you put into organizing and reading the letters, and then writing a prologue so your readers will understand what everyday life was like back in the 19th century, and lacing together the letters with comments and explanations. I’m in awe! BRAVO!  You sure deserve your awards!  Carla

Thank you so much for taking the time to read and organize these letters and then write this book.  It was such a wonderful experience to read about  the daily lives of people through these years.  It was so many amazing to realize that letters traveled so quickly during the 1800’s.  I had no idea that people were able to communicate this quickly through the mails in the past.  It seems that communications traveled as fast or faster than our current postal system.

I am also thankful that a member of this family was so thoughtful to take the time to send these letters to a place where they could be reviewed and saved for posterity.  It would have been so easy to just trash this box of letters but someone in the family did a big favor to history to take the time and effort to send these letters to the library.  Of course, it all would have gone no where further unless you had made the truly enourmous effort to compile all this information into a most interesting and entertaining book.   Every evening I would look forward to reading a little more about these families and all their daily trials.  I discussed the book with one of my nephews just to relay that even a hundred years or more in the past, families had many of the similar family problems we have today.

I thought the book’s prologue was so interesting to set the reader’s mind with the historical times.  The prologue as well as the entire book was so informative  and filled with historical detail that it made history enjoyable to read.

Thank you again for your tremendous effort.  A job well done.  Loved it, love it, loved it.

“Letters to Virginia encompasses hundreds of often intensely personal letters spanning three (matrilineal) generations of a northern Virginia family, over a period from shortly after the War of 1812 all the way to the eve of WW II. The work that the book’s author must have gone through to even read and decipher the variety of handwriting is impressive, let alone ordering, collating, and editing the (often agonizingly, but necessarily) incomplete collection to weave a logical narrative. The “cast of characters” reveal their lives in much detail, from the angst of disease, poverty, etc. to the hopes and dreams of future contentment. The saga provides the reader – and any future historians or novelists – with a rich tapestry of everyday Americana, mostly unencumbered by politics, etc. in the world they lived in.”

“I really enjoyed your book.  It took me back to very different times when homes were lit by gas lights, men wore hats and removable shirt collars, women wore those wide, rounded hoop skirts, and long-distance communication was by handwritten letter.  Through these wonderfully evocative letters fathers, sons, sisters, brothers, husbands, and wives revealed, not only their day-to-day lives, but also their intimate, and frequently difficult, family relationships and most intense thoughts.  Thanks for pulling it all together.”

“I’m half way through the book, but I had to write to tell you how good it is. I’m impressed by the cover art, the weight of the paper, the typeface, especially the script at the top of each page, and the whole thing. It is real class. And, of course, the content is fascinating history and easy to read while being so erudite.”

“I think your book is most unusual, very interesting, and quite understandable. I marvel at the work you had to do to dig through that morass of letters and make sense out of them and decide which ones to use, where to summarize, and which ones to ignore. I think your commentary between the letters provides the glue that makes them flow into a cohesive story.”

“Your editing has a nice light touch. It could be tempting to over-explain the times and the events. I think you add just the right amount of summary and comment.”

“The primary source material is so wonderful and you have done such a great job putting it into context.“