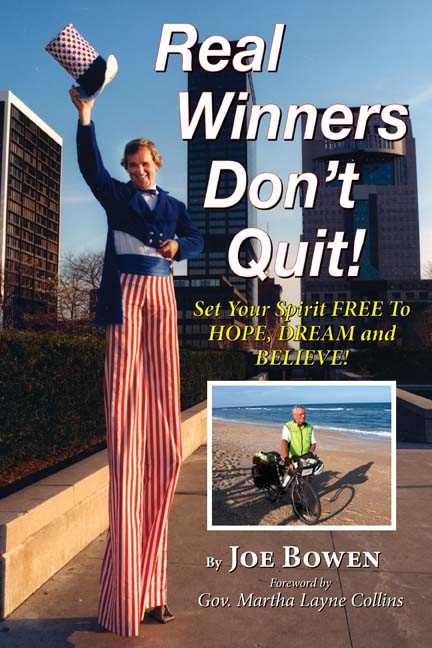 Set Your Spirit Free to Hope, Dream and Believe!

Real Winners Don’t Quit shares the adventures and life lessons of a man who lived Henry David Thoreau’s words, “…perhaps it is because he hears a different drummer.” In 1967, Joe Bowen began a remarkable journey on a bicycle to discover America for himself. At the time, there had been crossings of America on a bicycle but it was unheard of to travel 14,000 miles and 16 months on a bicycle! He left Lompoc, California with a meager $43.85 in his pocket. Whenever he ran out of funds he worked a few days painting a house, putting up hay on a farm or cutting firewood.

In 1980, Joe wanted to raise a substantial sum of money for his favorite charity, the Muscular Dystrophy Association. With the help of his fellow Jaycees, his 3,008-mile stilkwalk across America set a world record and raised more than $100,000 for the MDA. He stiltwalked in spite of his critics.

In 2005-2006, at the age of 62, Joe again bicycled 14,000 miles throughout North America. This time he did it as Kentucky’s Unbridled Spirit. He took 8,000 elementary children from Eastern Kentucky along with him. Joe was able to correspond with the children by telephone and a laptop computer that he learned to use during the first 1,500 miles of the trip.

Joe retired from a career as a construction worker after working his way up to working foreman. He completed these journeys of a lifetime, raised a family of three girls and raised more than $600,000 for his favorite charities even though he had to overcome many challenges along the way. It has been said that “he is an average Joe made unique by believing in the power within himself and within the human spirit.”

Joe lives in a beautiful home in the woods that he and his wife built out of the lumber they salvaged from 150-year-old houses which had been abandoned and given to Joe.

Joe Bowen graduated from the University of Louisville in 1978 after years of night classes. During all of his college work, he held down a full time job. His career was as a construction worker. In 1982, he wrote and self published the book Stiltwalk. On October 13, 1979, at halftime during the University of Louisville homecoming football game, Joe was honored by the University College by receiving their Outstanding Service Award. Joe has carried the Olympic Torch twice, once for the summer games in 1996 and the winter games of 2002. In 1986, Joe received the Ellis Island Medal of Honor along with Muhammad Ali, Gregory Peck, John Denver, Jacqualine Onassis to mention a few.

Joe is a motivational speaker, avid bicyclist and walks on stilts with his grandchildren when they visit. He lives with his wife, Barbara Crabtree Bowen, on Bowen Road in Bowen, Kentucky. They crafted their beautiful home out of lumber from homes of the early 1800’s that they dismantled themselves.

“He is an ‘average Joe’ made unique by believing in the power within himself and of the human spirit. Each journey shared is a chance for us to discover within ourselves the spirit waiting to be and set free – to hope, dream and believe.”

“The urge to do something better, something distinct, is the essence of human nature … Joe Bowen … has already broken the distance record set by another stiltwalker.”