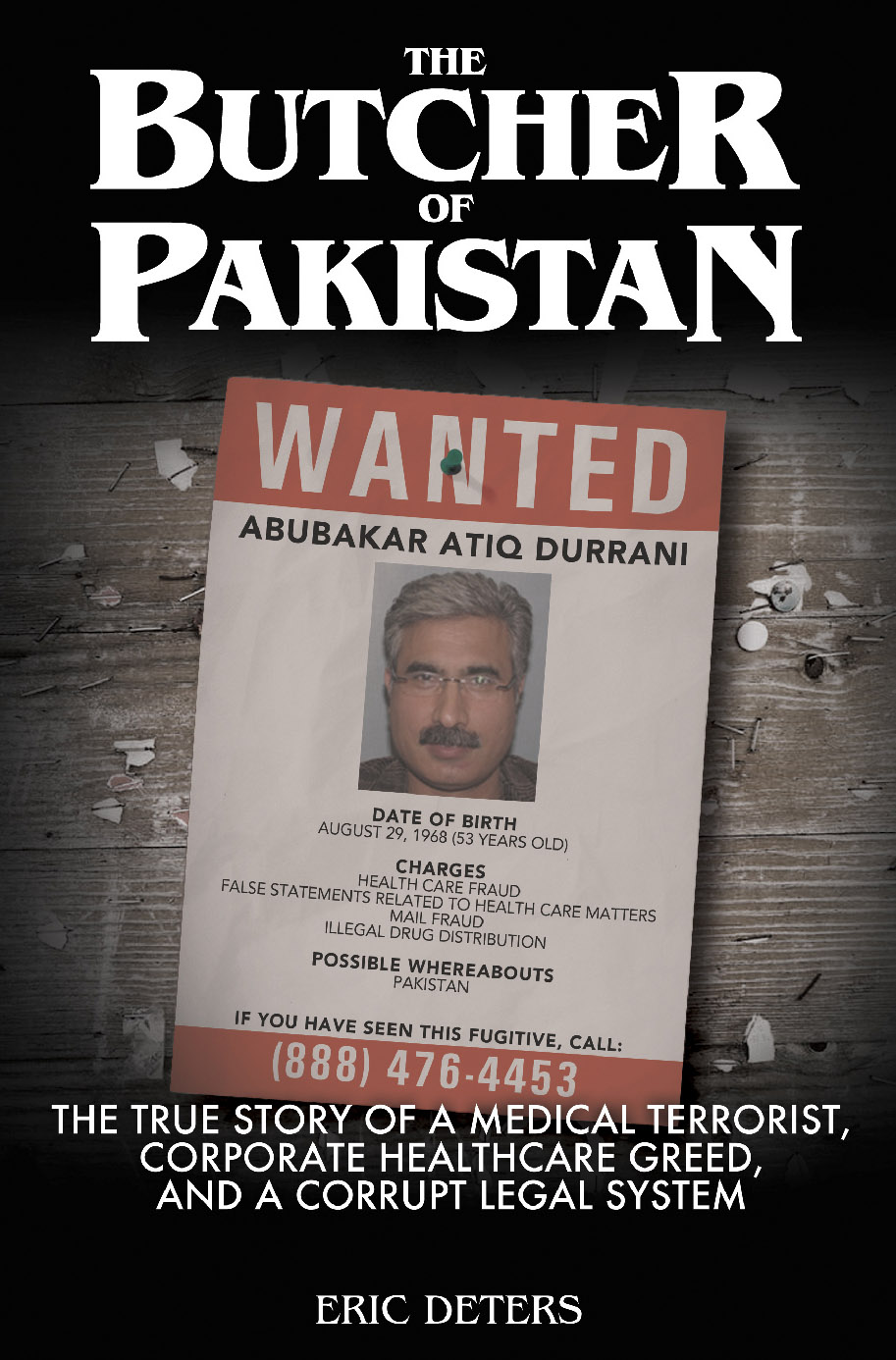 THE BUTCHER OF PAKISTAN

The True Story of a Medical Terrorist, Corporate Healthcare Greed, and a Corrupt Legal System

This is a true story.

From 2005 to 2013, Durrani performed unnecessary spine surgeries on unsuspecting victims in Cincinnati, Ohio hospitals. The hospitals knew he performed these unnecessary procedures, but they craved the money Durrani generated. Durrani’s insurance company, Medical Protective, refused to pay the victims. Eric Deters fought and continues to fight an epic battle unlike any other in the history of American law. The Ohio court system, led by the corrupt Chief Justice Maureen O’Connor, refused to provide the victims timely trials. The Kentucky Bar Association and Ohio Disciplinary System would do all they could to aide Durrani by assailing Eric Deters at every turn.

This saga covers a thousand victims and a thousand anecdotes including the following:

In the history of American law, no group of citizens in America have suffered more incomprehensible injustice than the Durrani victims. This is their true story.

OFFICIAL TRAILER FOR BUTCHER OF PAKISTAN

This film is based on the book, “The Butcher of Pakistan” by Eric Deters. It is the story of nearly everything wrong with modern American medicine and the legal system intended to provide justice for all its victims. This documentary tracks the continuing story of a surgeon who needlessly operated on hundreds of patients in several well-known hospitals in Cincinnati, Ohio. Even after many deaths, and untold mental and physical damages to victims, hundreds of lawsuits are stalled and still pending in the judicial system. Why?

Top reviews from the United States

Verified Purchase
This book is impossible to put down. Corruption from top to bottom in the legal system? In THIS country? DUH. “Justice delayed is justice denied.” Over 500 victims of this evil man know what that feels like. They’ve been waiting for 9 years, ever since this s***bag got a fake passport and absconded to Pakistan. His legal team are almost as bad, and with incompetent and biased judges, NOTHING has been done to right these wrongs. Eric Deters is a pioneer, a hero to be revered. He actually went to jail, standing up for his clients! Buckle up – this could turn out to be bigger than Erin Brockovich!
Cheri Potts
5.0 out of 5 stars This is unimaginable! Yet truth!

Reviewed in the United States 🇺🇸 on November 4, 2022

Verified Purchase
This comprehensive narrative details the depredation that the Butcher of Pakistan wrought upon unsuspecting men, women, and children in Cincinnati, Ohio. Exposes astounding, unbelievable details of the many tangents of this prolonged case. Validation for the butchered as they await justice. How can you not applaud and root for Eric Deters and Deters Law to ultimately conclude this travesty? BRAVO Eric Deters for your passion and commitment!!!
Casey Koelblin
5.0 out of 5 stars Fascinating and every word true.

Verified Purchase
Loved “The Bulldogs” first hand account. Rather than being through someone else’s interpretation of his words. He lived it, and he’s still living it with his clients. Every law school in the country should be kicking his door down to have him teach their law students. But we will settle for next Governor of Kentucky.
Tammy Dale
5.0 out of 5 stars Destroyed Life

Reviewed in the United States 🇺🇸 on November 5, 2022

I am one of the victims. Not only did he destroy the life of the patient he also destroyed the lives of their family and friends who watches the victim that went through the horrible ordeal and still live with the pain and more often more problems than they originally started out with. To me the court system and Medical Protectective just keeps slapping and hurting each of us victims day in day out. The pain we go through each and every day must be satisfying to any of them that stands for Durrani. What a legal system we have to make us wait this long for our day in court. If you want to know the whole truth that Eric and all of the staff and victims go through, I highly recommend reading this book. Thank you Eric for everything. God bless you, your family and all of the staff that is helping us.
Amazon Customer
5.0 out of 5 stars Riveting story from opening chapter to the very end!!

Reviewed in the United States 🇺🇸 on November 8, 2022

This book details the horrors of the medical profession and the corporate hospitals and insurance companies who help them perpetrate their frauds and money schemes. The author, Eric Deters, goes into great detail about his legal battle against a Cincinnati spine surgeon who performed hundreds of unnecessary spinal surgeries on the patients who trusted him the most – all to bilk their health insurance out of millions. Once the federal government caught on to this slimy surgeon, he was able to escape imprisonment by illegally fleeing the country while under indictment. You must read this book to see what happens next and how big business (hospitals and medical malpractice insurance companies) manipulate the legal system to protect this hideous doctor. It needs to be a Netflix series.
Sarah York
5.0 out of 5 stars Compelling Read

Reviewed in the United States 🇺🇸 on November 8, 2022

Once I started this book, I couldn’t put it down. Eric’s ability to tell this compelling story was powerful and eye-opening. It was devastating to read how corrupt the system is and what they have done to these victims, who have already suffered at the hands of the doctor. This book gave me insight into corporate healthcare greed and what people are willing to do for money. I am so sad at the injustice the Durrani clients have endured as a result of Dr. Durrani, the defense counsel and the Court system. I highly recommend reading “The Butcher of Pakistan.” I hope this will one day be a popular documentary on Netflix to expose the evil injustice.
Michelle Boggs
5.0 out of 5 stars Corruption in so many different manors…..

WOW!!! This book throws a punch for sure…as u keep reading it gets more n more intense and grabs u straight into these victims lives…u actually feel like u are part of this corruption and it makes u want to keep reading to see if Justice finally happens on each and every page…it honestly is hard to quit reading…u just want to keep flipping those pages to read what happens next…because seriously…this just can’t b real…and IT IS!!! Such a heartbreaking book that u just don’t want to put down….Thank u 4 capturing this for these victims…Amazing book….u won’t b disappointed if u buy it and read it….again…Just WOW!!!

Eric C. Deters  During Eric Deters’ law career, he once was the #1 viewed law profile in the country on the national law website martindale.com. Cincinnati City Beat magazine once named him the #1 lawyer and troublemaker in the city. Chuck Martin of the Cincinnati Enquirer on January 2, 2008, gave Eric the nickname “Courtroom Bulldog.” From 2010 to now, over ten years, Eric Deters has managed the Dr. Durrani litigation, the subject matter of this book. In addition to his legal career, Eric Deters has hosted radio Learn More about Eric C. Deters

“Some sort of effort to protect the public should’ve been undertaken.”

“Durrani routinely operated on multiple patients who were under anesthesia at the same time and would run room to room doing the procedures.”