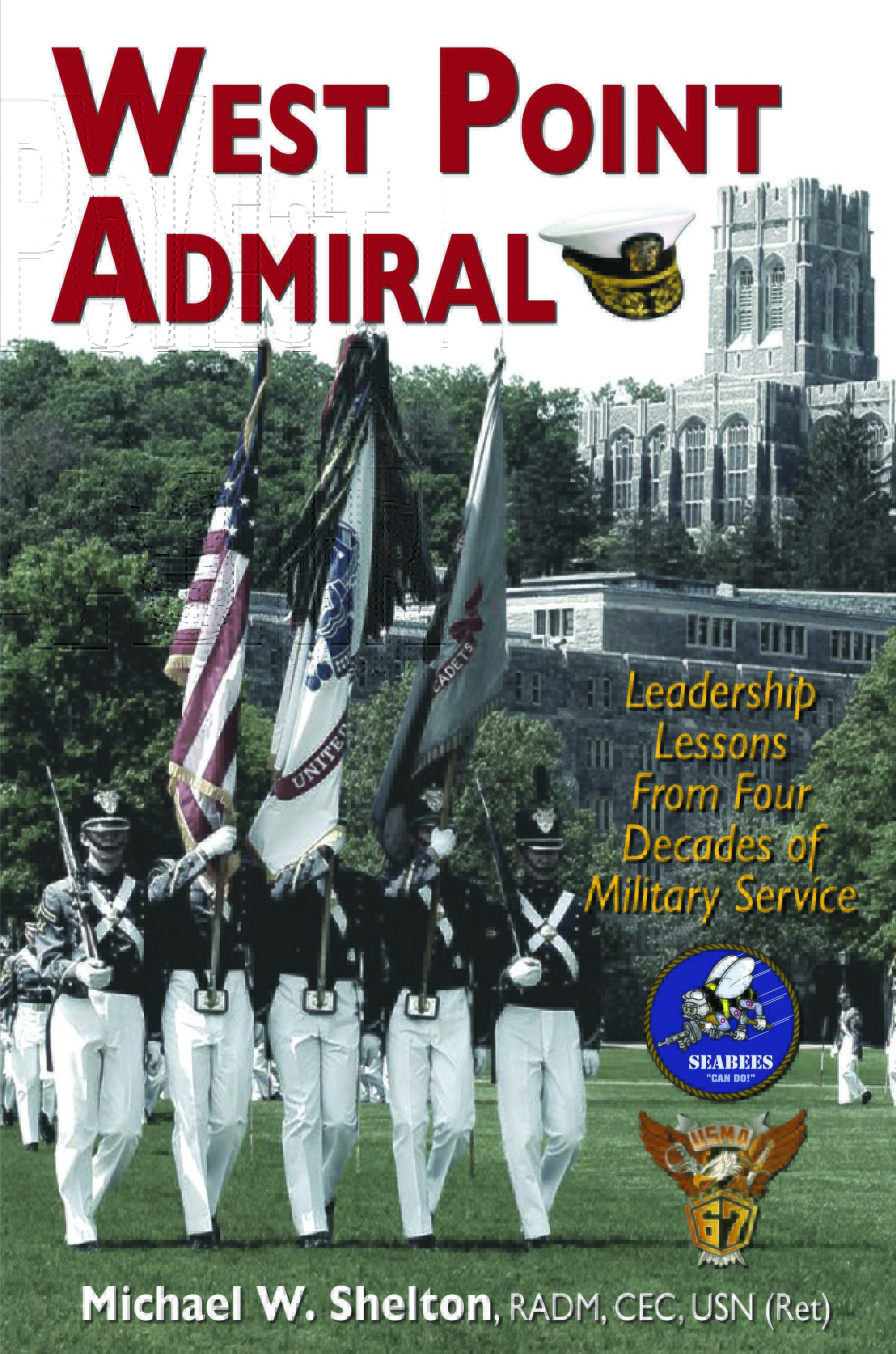 “How can you be a West Point graduate and a Navy admiral?” Mike Shelton has been asked that question many times throughout his life! Indeed, when Cadet Michael Shelton began his Plebe year at the United States Military Academy at West Point in 1963, he had no idea that four decades later he would retire from military service as a Rear Admiral in the US Navy.

In West Point Admiral: Leadership Lessons from Four Decades of Military Service, Shelton outlines his military career beginning with West Point, the war in Vietnam, and through postings across the globe. Along the way, he witnessed firsthand the traits of good leadership—and bad—as he rose steadily through the ranks.

Shelton provides his candid perspective on how the military has evolved through the years and the differences between Army/Navy philosophies, all while telling the story of his life in the service and his beloved US Navy Seabees.

Michael W. Shelton, RADM, CEC, USN (Ret)MIKE SHELTON grew up in a Navy family and received a competitive appointment to West Point. He graduated in 1967, was commissioned in the Navy Civil Engineer Corps, serving thirty-four years on active duty, and retired as a Rear Admiral in 2001. He spent the next fourteen years in private industry,  first as President of Burns and Roe Services Corporation. He then moved to EMCOR, a multibillion dollar specialty construction corporation, running its government facilities services subsidiary, EMCOR Government Services. He reorganized Learn More about Michael W. Shelton, RADM, CEC, USN (Ret)

“This is a story of a young man joining the Civil Engineer Corps and his journey, first as a junior officer in the field, all the way to the halls of power in the Pentagon. Mike saw the Navy’s inner workings—some of it he liked and others he did not—but he did everything he knew how to do to make it better with courage and commitment. I was able to walk that journey with him as a junior officer and an admiral. Some of Mike’s experiences match almost word for word, thought by thought, with mine. Others quite the opposite, but that’s not the story. The story is about his commitment to the Corps and his joy serving the nation, tempered by the opposite: his utter frustration with ‘the system’. My personal involvement and final approval of his consolidation of Seabee commands into the 1st Seabee Division was a benchmark for both of us.  is Ensign to Admiral story creates a record of his very unique experiences, spoken from his heart and gut. I’m wishing Mike every success with the book.”

“I have known Mike Shelton in excess of forty years and have always considered him one of my closest friends. If I was still Chief of the CEC and Head of the Seabees, I would make this required reading for all CEC Officers and Senior Enlisted. This is exceptional reading for anyone who might think they understand how things are done in DC but have never served there. Well done, Mike!”

“Mike Shelton’s life took a right turn right out of college. Upon graduation from Army-oriented West Point, he took a Navy commission. From there, Shelton chronicles his ascent to admiral with illuminating nuggets, opinions, and lessons learned in leadership tactics in a changing Navy. Part memoir, part historical guide and part primer on the vast resources and systems required to support the military, Shelton opines on a range of topics from fellow o cers to diversity requirements to subjects like military housing requirements. Every reader will not agree on all those broader opinions — I didn’t. But by reading his story, we’re all better informed about how the military is run, who runs it and the massive effort it takes to run it.”

“Author Michael Shelton not only describes his experiences as he navigates the challenges of his career assignments in the Navy, he integrates the political and practical implications of the times. A sign of a good leader is leaving an organization in better condition than when it was taken over. Michael excelled in this regard instilling the Navy’s core values of honor, courage, and commitment in the units he commanded. And, he describes what leadership skills he used to do so. Well written. A must”