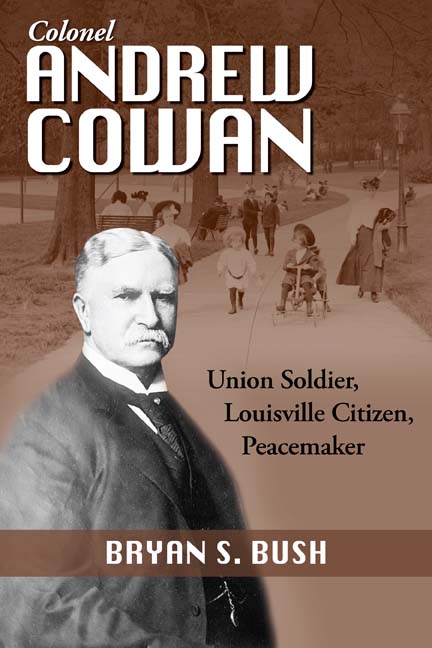 Native Scotsman Andrew Cowan immigrated with his family to New York in 1848 and was attending Madison University when the Civil War erupted upon the American landscape. At the young age of 20, he answered the call for volunteers from President Abraham Lincoln and joined the Union army. Over the next four years, he rose through the ranks of the artillery, becoming a colonel commanding his own brigade. During his military career, he fought in some of the most bloody and costly battles of the Civil War, including the battles of Antietam, Fredericksburg, Chancellorsville, and the Overland Campaign, as well as the battle of Gettysburg, where his battery literally faced Confederate General George Pickett’s Charge. In 1865, Cowan was even present at the surrender of Appomattox, when Confederate General Robert E. Lee surrendered to Union General Ulysses S. Grant, which essentially ended the Civil War conflict.
Following the War, he moved to Louisville, Kentucky and became a very successful businessman in the leather industry. With his success in business, he decided to follow in the footsteps of Andrew Carnegie and use his wealth towards philanthropic endeavors. He was on the board of directors for the Southern Exposition (1883-1887), helped raise funding for the base of the Statue of Liberty, and came up with the idea for a Louisville Park System. Once his idea of a Louisville Park system was approved by the philanthropic organizations in Louisville and the city, he helped raise funding for the Louisville park system and served as President for the board of Park Commissioners.
Later in life, he tried to mend the wounds from the Civil War that tore the country apart. He was the father of the “Blue and Gray Reunion” at Gettysburg in 1887 and helped organize the Fiftieth Anniversary Reunion at Gettysburg, was entertainment director for the 1895 Grand Army of the Republic reunion in Louisville, helped with the organization of the 1905 and 1917 Confederate Veteran’s reunion in Louisville, and helped raise funding and helped organize the festivities for the unveiling of the Abraham Lincoln Memorial in Hodgenville, Kentucky.
Although he fought for the North during the War, he dedicated his life after the War towards fostering peace between the North and South. He served not only his city and his country, but also he served his fellow man.