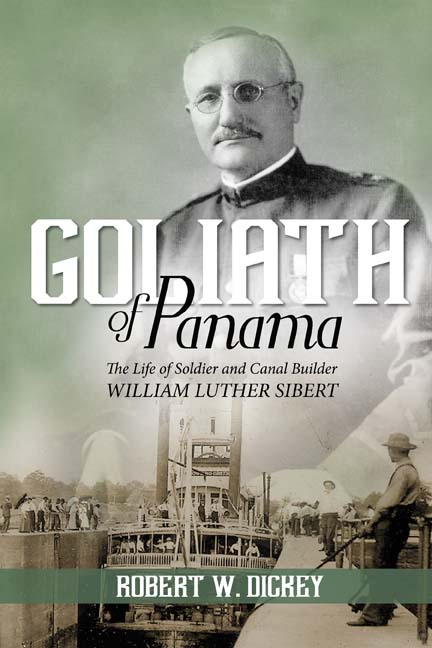 The Life of Soldier and Canal Builder William Luther Sibert

Given the time, place and circumstances, the Panama Canal remains the greatest engineering enterprise of the 20th century. A mathematically-gifted Alabama farm boy, who later found a home in Old Kentucky, parlayed his imagination and engineering expertise to conquer the most technically demanding part of Panama Canal construction—Gatun Locks and Dam.
William Luther Sibert arrived in Panama in 1907, part of President Theodore Roosevelt’s Army Corps of Engineers spearhead with orders to pierce the forbidden Isthmus of Panama,where thousands died during the failed French efforts. The American attempt was a long shot according to conventional wisdom—until the world learned all about TR and his Army Engineers.
Crowning his canal success, Congress promoted Sibert to brigadier general, an honor that proved costly to the hybrid Sibert—one of the foremost engineers of his time and a soldier. After organizing and training raw recruits into the Big Red 1—America’s only infantry division in France in 1917—Sibert was relieved by General John J.Pershing because of his engineering pedigree! Back Stateside, Major General Sibert created the Army’s first Chemical Warfare Service.
Soldier Sibert led fighting engineers into hostile territory and rebuilt the islands’ only railroad during the Philippine Insurrection (1899-1900). Engineer Sibert championed Ohio River navigation, blew up a dam on the Allegheny and planned a mammoth flood control system for the emerging Republic of China.
Following World War I, there tired general took time from his hobby of fox hunting to engineer the dock-rail-highway complex that transformed Mobile, Alabama, into a major American port. At President Calvin Coolidge’s request, he chaired the Sibert Commission that reviewed and subsequently approved plans to construct Boulder (Hoover) Dam.
The General was Everyman, taking his lumps during a career crowded with numerous pitfalls, dodging some and paying a painful price when ensnared by others. Regardless, his endeavors were monumental in scope. He was a great American in peace and war.

“This book details the life of Brigadier General Sibert, ‘the engineer without fear and without reproach,’ and will be informative to readers with interest in engineering, construction, and the U.S. military.”

“The story of General William Luther Sibert is an interesting and often exciting one. … Author Dickey has tracked down hidden sources to bring alive this man’s history once more. He does justice to a full life and tells the story in a personable and readable form. All those interested in military history, engineering history, and Kentucky history will find Goliath ofPanama an enjoyable read.”

“A fitting tribute to an Army officer who played a key role in building and transforming our Nation’s waterways for the 20th Century. …Sibert’s can-do attitude serves as an example of how to think big, be bold, and ensure success for the today’s leaders.”

“Roosevelt’s international board of engineers set the stage for Sibert’s travail when the majority report recommended a sea level canal, citing the dam planned for Gatunas a major reason for avoiding dams and locks with a sea level approach,” Robert W. Dickey explains in “Friction and Fun in Panama,” the 13th chapter in “Goliath of Panama: The Life of Soldier and Canal Builder William Luther Sibert,” his compelling new portrait of a farm boy from Alabama with a gift for mathematics who helped change the world’s geopolitical landscape.

“President Roosevelt, of course, rejected the report and ramrodded through Congress a slack water navigation plan – a system born of dams and operated by locks, as recommended by the panel’s minority,” Dickey continues. “After appointment to the Isthmian Canal Commission, Sibert studied the alternatives in detail and found himself in full agreement with the locks and dams concept. He welcomed the opportunity to participate in building the world’s greatest slack water navigating system.  He knew it would work as it had worked on the Green and Barren Rivers back in Kentucky, only exponentially bigger and more complicated.”

Full disclosure: If I had been on “Jeopardy!” and was asked a question about Sibert’s life before reading this mesmerizing biography, I no doubt would have lost that round. Of the many facets of Dickey’s writing I find appealing, his choice of individuals to profile is perhaps most intriguing. As a few of the more loyal and observant readers may recall, I reviewed his previous book,“Greyhound to Vegas,” in August 2011. Prior to reading that book, I had no idea who Hilda Reynolds Krause was or why her death mattered. By the time I completed the book, however, I felt I knew her intimately. I had exactly the same experience with “Goliath of Panama.” When I finished the epilogue, I had the strange yet oddly satisfying sense I knew who Sibert was on many levels –not just what he accomplished during his remarkable career as an engineer.

For instance, I found Dickey’s description of Sibert’s time at West Point, which led to his being assigned to the Corps of Engineers – an appointment generally reserved for the top echelon of a graduating class – to be particularly insightful and wonderfully illuminating with respect to capturing the essence of who he was as a human being and a friend. Among the many anecdotes included is one about a universal rite of passage most of us have had to endure at some point; i.e., dealing with a bully. This little vignette also highlights the equally ubiquitous danger of stereotyping someone based on their background and upbringing.

“With an age and experience advantage, including intramural boxing while at the academy, his classmates declared the Yearling a heavy favorite,” Dickey writes in “West Point: David and Goliath,” the fourth chapter. “They knew Sibert’s farm boy background, a big fellow but very likely unskilled in boxing and the manly art of self defense. Wrong! Unknown to the Yearlings, Sibert had recognized early that his size alone made him a potential target for bullies and had taken boxing lessons in Tuscaloosa. …

“At the appointed time, the farm boy wasted no time in carrying the challenge to the Yearling, quickly demonstrating that he knew the difference between a left cross and a right uppercut and knew how to use them to great effect in a fistfight,” Dickey notes. “The Plebe soundly thrashed the Yearling, indeed a rare occurrence. At the bout’s conclusion, the Yearling conceded, and Sibert graciously accepted the surrender. Thereafter, the Yearling patched it up with the Plebe he had abused while the boxers shook hands and parted as friends.”

Dickey attended Centre College in Danville and Western Kentucky University. After serving in the U.S. Marine Corps, he worked as a reporter and local news editor for the Park City Daily News before eventually graduating from Vanderbilt University Law School; he subsequently practiced law in Kentucky for four decades. His previous books include “Near Misses,” “Dynasty of Dimes” and, as mentioned earlier, “Greyhound to Vegas.”

The current release is extensively researched for a work of this nature, with 10 pages of endnotes at the conclusion of the prologue, 17 chapters and epilogue that comprise the main narrative. A feature I found especially useful was the inclusion of a 30-page pictorial section midway through the text containing a plethora of vintage photographs, documents and other illustrations that help the reader visualize the events Dickey describes during the course of this fascinating memoir.

Aftermaking my way through this superbly-crafted tome, the following passage, from“Boulder Dam and Mobile Docks,” the 17th and concluding chapter, literally jumped out at me:

“William Luther Sibert, an adopted Kentuckian, will no doubt forever remain a favorite son of Alabama. His major legacy – the modern port at Mobile – is much like the man himself. It just seems to roll up its sleeves and go to work, and get the job done on a daily basis – more than 80 years after the ribbon-cutting.  If he happened by today, the unsurprised chief engineer might suggest a few innovations.”

Dickey produced an enthralling and intrinsically captivating story of a largely unsung American hero who helped change the world; I can easily see Sibert’s extraordinary life being made into a major motion picture. If you are a serious student of history, you should definitely add this one to your bookshelf.  If, on the other hand, you’re simply looking for a stimulating read that will hold your attention hour after hour, “Goliath of Panama” won’t disappoint.  I recommend this one highly – and I also look forward to seeing who Dickey decides to write about next.  He has a natural talent; I’m glad to see he isn’t letting it go to waste. 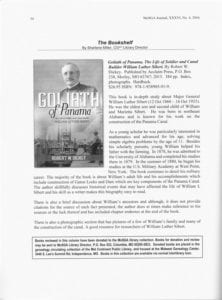