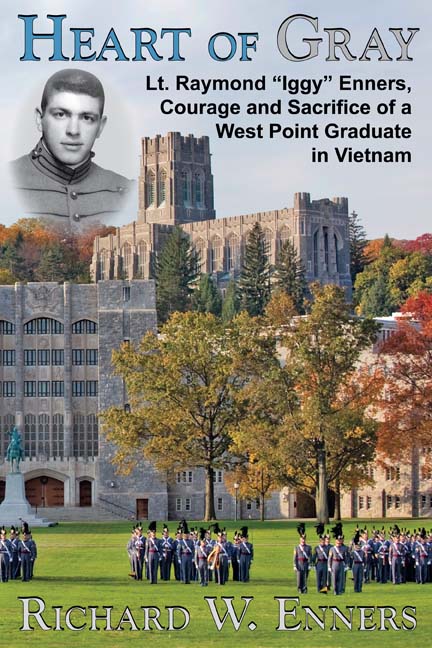 Heart of Gray was written to honor the life of 1Lt. Raymond J. Enners who, after graduating from the United States Military Academy at West Point, served his country with the Americal Division in Vietnam, where he was killed in the line of duty at the age of twenty-two.

A natural leader, Ray was a world-class football and lacrosse player who won honors in high school and later won honors playing lacrosse at West Point. Today, the USILA annually presents the First LT. Raymond J. Enners Award for the best intercollegiate lacrosse player in the nation-some call it the Heisman Trophy of lacrosse.

Heart of Gray presents a gripping account of his distinguished life…from his formative high school years, through his cadet life at West Point where he honed his leadership skills, to the events leading to his death in the paddy fields of Vietnam where he earned the Distinguished Service Cross, the nation’s second highest award for valor.

Written by his younger brother Rich, who is also a West Point graduate, Heart of Gray embodies the ideals of Duty, Honor, Country learned by every member of the Long Gray Line—a code that Ray Enners embraced and is still being taught to future leaders of America’s military. 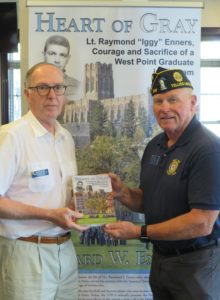 The recent guest speaker for the American Legion Post 256 is also a member of the Post and author of the book Heart of Gray. Richard Enners wrote the book to honor the life of his older brother, 1Lt Raymond J. Enners, who after graduating from the United States Military Academy at West Point, served his country with the Americal Division in Vietnam, where he was killed in the line of duty at the age of twenty-two. Heart of Gray is a riveting narrative of a leader-warrior who chose the “harder right instead of the easier wrong” when on 18 September 1968 in a brutal firefight near Xã Ky Mao, Quảng Ngãi Province he rescued a wounded squad leader ten meters from the NVA position then led his platoon into the thicket, giving his life in the process. For his actions he received the Distinguished Service Cross, the nation’s second highest award for valor. Heart of Gray takes you on a journey of selflessness and sacrifice—a journey of how 1Lt Enners’ rigorous military training provided the confidence and courage to face life threatening situations. Heart of Gray is not only a story of combat … it’s a leadership guide highlighting the role character and values play in influencing others.  For further information or to purchase a signed book contact Richard Enners at renners2929@aol.com. Net proceeds will be donated to the American Legion Post 256.

Endorsements for Heart of Gray

Richard Enners’ Heart of Gray is an inspiring tribute to his brother, Lieutenant Raymond Enners. What sets this memoir apart is how Enners connects the cadet experience at the United States Military Academy, and its inculcation of the warrior ethos, to the heroism his brother demonstrated in the crucible of combat during the Tet Offensive. This moving book conjures up the spirit of his brother, as well as so many others from The Long Gray Line who have given their lives in service to their country.
— Siobhan Fallon, Author, You Know When the Men are Gone
__________________________________________________

Success in all team sports relies on great leadership and supporting the concept of TEAM by contributing to something greater than yourself. Lt. Raymond Enners embodied these values on the playing field and in life. “Heart of Gray” reveals Lt. Enners’ exceptional characteristics through his heroic actions and daily life. A truly inspirational story and legacy.
— Chuck Mitrano, former President, United States Intercollegiate Lacrosse Association and Empire 8 Commissioner
___________________________________________________

The story of Raymond Enners is an inspiring illustration of how commitment and duty to others learned through athletics, family, and education captures the essence of great leadership evolving through selflessness, dedication, and humility. The life lessons learned by Raymond Enners through participation in athletics are compelling in his actions of bravery and heroism as he made the ultimate sacrifice for his team. Heart of Gray provides a true appreciation of the special person that Raymond Enners became during his lifetime.
— George Searing, President, Suffolk County Lacrosse Coaches Association
_______________________________________________

Heart of Gray is an appropriate read for anyone interested in learning more about inspirational leadership and living life with a purpose. Iggy Enners was a living example of the Army values of loyalty, duty, respect, selfless service, honor, integrity, and personal courage.
— Kevin W. Farrell, Colonel USA Ret., Former Chief of Military History, West Point
_______________________________________________

This is not just another story of military life or the consequences of a highly disputed war but more of the gift of Leadership and Trust developed by Iggy Enners during his years at West Point and put into motion in Viet Nam. Gripping in recreation of Lt. Enners and his platoons “search and clear” missions to the emotional return and burial at West Point. Life lessons in leadership styles and putting “self” last a key component to the narrative. Enjoy the read!!
— Bob Goodale
_______________________________________________

[Heart of Gray] is an excellent book, and well-written, emotionally engaging, and an ultimately inspiring story, despite the tragic ending.
– Jim Reilly USMA Class 1967

I was there with “Sykes Regulars” and remember them all. This is a book about heroes: well written and accurately described

Honor, duty, and courage – this life story of Lt. Raymond “Iggy” Enners is one of the best examples of all these. Told by his loving and devoted brother – it is a story that needed to be told. Future generations need to read about these kinds of men; not just a sports hero but also a true combat veteran who gave his life to save the men he commanded. This is an inspirational story that would make a great movie. Richard Enners does a great service for the rest of us who did not know his brother.

A FIVE STAR BOOK by any measurement. People who love sports stories and military history and adventure will find this to a good read. I fully endorsement this book

[Author] Rich Enners’ new book, Heart of Gray, about his brother Ray, is a poignant and at times gripping story of a son of the Greatest Generation who became a pillar of his own generation before his life was cut short in battle.

Rich takes us on a journey from Ray’s childhood on Long Island through his formative years at West Point and finally to [Vietnam]. Along the way, through a brother’s knowledge and testimonials of those who competed with him and fought with him, we learn about a man who was on a path to be a world-changer. We read how the seeds of Ray’s leadership were sown and later grew and how achieving excellence encompassed his worldview. Strength of character and leadership became embedded in his DNA, and manifested itself throughout the sports he played, especially Lacrosse, and ultimately in soldiering, where he paid the ultimate price. The book is a must read for anyone in the military, as well as those who call lacrosse a passion, for Ray excelled in both arenas.

Heart of Gray made its way to the top of my reading stack, and I read it. I want to applaud [author] Rich Enners for not only a heartwarming and heart wrenching story about the selfless life of his brother, my classmate, Ray (Iggy) and his character, but the intertwining stories of family and friends, as well as his thorough chronicling of my four years at the Academy, complete with the slang and sayings that brought them to life.

Heart of Gray is [a] book and story of a leader who exhibited extraordinary character from the earliest times of his youth to his sacrifice for others.  If I were younger and playing in sports leagues, I would wear [his number] 26. One of my most cherished books.

What a wonderful book you have written about your brother. He was and still is a hero. We shall not forget his valor and sacrifice

“It’s for brave and courageous Men like Lt. Enners, who sacrificed everything they had and would ever have, for us. This is why we stand for the flag with our hands over our hearts and tears in our eyes when our National Anthem is played.”

Iggy was the special one! The most humble, selfless, quiet leader I have ever had the privilege to be a buddy. Rich’s story validates Ray’s leadership, courage, and fearlessness. He only knew one way to live his life and that was all out for everybody else but himself. He’ll always be my hero.

[Heart of Gray is a story] of commitment and courage – an example that encourages others to be good family and team members, good citizens, and leaders.  Such stories help keep America on the track that we started. This is a story, a true story, of an exemplary author and book as well.

We thank Ray for his very brave service and sacrifice. What a great tribute to such a great man – such an inspirational book. Ray most likely touched and inspired more lives in his “too short” stay in this life than many who lived many more years than he. His memory lives on in scholarships created in his memory.

A matter of honor: reflections of character and courage