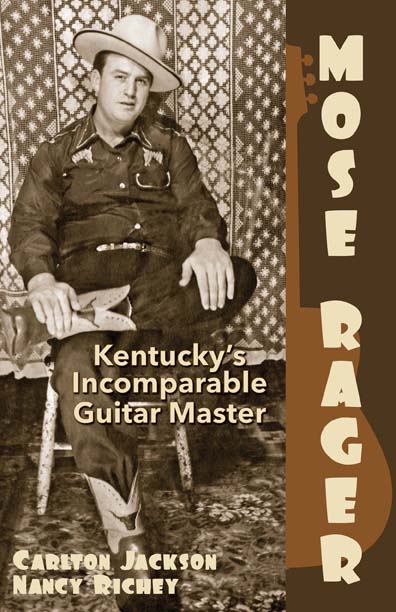 Mose Rager: Kentucky’s Incomparable Guitar Master is the story of this true Kentucky music legend who preferred living the quiet life to the fame he could have earned playing the country music circuit.
There are many country guitar legends, Chet Atkins, Merle Travis, and Eddie Pennington, to name a few, who trace the roots of their music to Mose Rager of Muhlenberg County, Kentucky (home of the Everly Brothers).
Known for developing a unique thumb-picking style, Mose worked as a barber and a coal miner when he wasn’t playing gigs with Grandpa Jones, Curly Fox and Texas Ruby.
Readers will appreciate the skills and easy way of this gifted “box” player, and learn why Highway 176 in Drakesboro, Kentucky is named Mose Rager Boulevard in his honor.
Although Mose died on May 14, 1986, his sound lives on when modern-day pickers try to play “That Muhlenberg Sound.”

“For the many who never met this gracious, talented man, this book will provide a great opportunity to get to know Mose Rager on a more personal level…you will see what a wide path that Mose opened as he traveled down the road of life with a thumbpick stuck on his right thumb.”

This book is for everyone who loves ‘That Muhlenberg Sound’ and wants to know more about its birthing and history, the pathways, connections and continuum of this Western Kentucky community-based style…and, of course, the ‘shy guitar master’, Mose Rager….”

n their new book from Acclaim Press, the late professor, author and historian Carlton Jackson (1933-2014) and associate professor and librarian Nancy Richey of Western Kentucky University weave the fascinating story of a true musical innovator and the musical style he inspired.

Born in 1911 in Ohio County, Moses (aka Mose) Rager was born to humble people and circumstances in the community of Smallhaus in Ohio County. Growing to maturity in this coal-based community, Rager, who also worked as a coal miner and a barber in Drakesboro, is credited as the originator of a unique guitar style called “thumb-picking” or “Travis picking.” The style has been carried on today by virtuosos like local musical legend Eddie Pennington. Pennington, like thumb-picking’s most well-known proponent, Merle Travis, was drawn to the sound and to Rager as a teenager and absorbed the musical concepts and techniques from this humble, unassuming man. While he could have easily achieved stardom, Rager avoided the spotlight and preferred to remain in his home area rather than assume the difficult life of a traveling musician. A deeply religious man, Rager also sought to avoid the many temptations of the road. Although he did play with country music legends like Grandpa Jones and Zeke Clements and toured briefly with Ernest Tubb, Rager was always drawn back to the simple pleasures of home and family and was content to play in his home and shop while the musical world came calling to listen and learn.

The thumb-picking style of guitar originates in the acoustic music of 19th-century African-American street performers like Arnold Schultz, whom Rager found fascinating as a teenager and sought to emulate. Jackson and Richey take us carefully through this complex cultural history of the evolution of musical styles in rural America. Music has always been an area of American life where race and ethnicity did not dominate the cultural interactions and musicians of all backgrounds found common ground in their shared love of music. More popularly called “that Muhlenberg Sound,” thumb-picking is characterized by alternating bass progressions played with the thumb, innovative chord progressions and the melody played with the fingers. This combining of techniques gave traditional country melodies a jazz-like sophistication that was unique to the country genre and was an instant success with audiences in America and abroad. Rager’s distinctive guitar style was first made popular in the 1940s and 1950s by guitar luminaries like Merle Travis, Ike Everly (father of the Everly Brothers) and Chet Atkins of Grand Ole Opry fame. Check out examples of Rager and other masters of this engaging and complex musical style online at sources like YouTube.

Jackson and Richey take us artfully through Rager’s personal and musical story in an easy-going style that holds the attention of the reader. Their attention to detail and accuracy is apparent but does not detract from the fact that this is a really interesting story of a fascinating individual.

While Rager passed into history in 1986, this well-written story of his life and times will ensure that the father of “that Muhlenberg Sound” and “shy guitar master” will live on to inspire future musicians, cultural historians and anyone interested in this still-vibrant musical tradition.