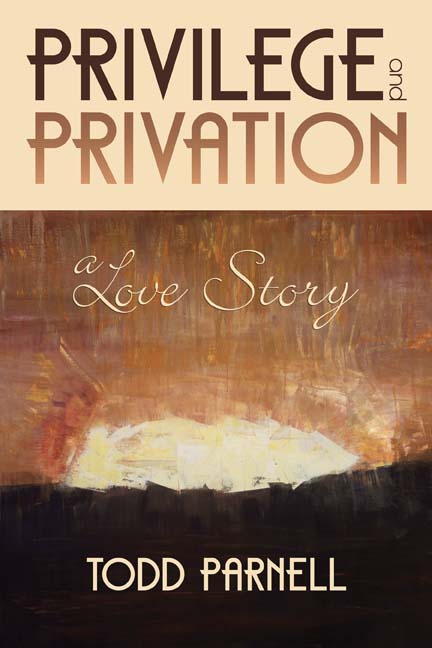 Lucy, meet Lenny. Lenny, this is Lucy. What do you have in common? Nothing?

Privilege And Privation, A Love Story is a fictional tale of two young people from immensely different backgrounds who fall in love. It is set amidst the contradictions of “haves” and “have nots,” the violence and hopelessness of those who don’t, and the dreams and hypocrisy of those who do.

The story line follows the fortunes of Lenny, a middle class kid, and Lucy, a child born in poverty, from their earliest years. It highlights the impact of parental involvement, quality early childhood care and education, and recognition of each’s special gifts on the developmental process.

Privilege And Privation puts human faces on the challenges we face in understanding and bridging cultural gaps, and provides a look at “class” from down to up, and up to down. It is a tragedy, a love story, and most importantly, a vision of hope. 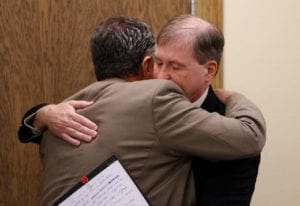 For generations, Springfield families struggling to make ends meet will have help to pay for high-quality preschool because of the leadership of a former executive editor of the News-Leader.

David Stoeffler, in charge of the newsroom from 2010 to 2014, was honored early Friday with an endowed scholarship fund in his name.

Under his leadership, the News-Leader devoted more than two years to a public service journalism project that highlighted the most difficult issues facing children in the Ozarks, including abuse, neglect, poverty, lack of access to health care and secure housing and food, and lack of school readiness.

The front-page coverage led to the Every Child Promise, a community group founded in 2014 to empower families so that every child, birth to age 6, will be ready to learn upon starting school.

“We are celebrating the importance of good journalism and the role it can play in holding a community responsible,” said Brian Fogle, president of Community Foundation of the Ozarks. “We are here to celebrate the impact one person can have in launching a promise and demanding accountability to that promise.” 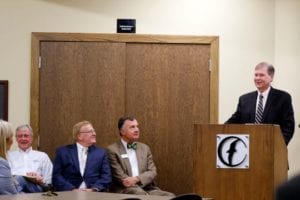 Community leaders and the Every Child Promise honored the leadership of former News-Leader executive editor David Stoeffler. The former journalist was honored with an endowed scholarship fund in his name. (Photo: Bruce E. Stidham/Special to Springfield News-Leader) 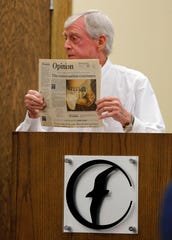 Todd Parnell, former president of Drury University, was the inaugural co-chair of the Every Child Promise along with his wife, Betty. At Friday’s event, he held up a photo that ran as part of a project on children living in poverty. (Photo: Bruce E. Stidham/Special to Springfield News-Leader)

The endowed fund was made possible through donor gifts in appreciation for Stoeffler’s work and the sales of “Privilege and Privation, a Love Story,” a book written specifically for the Every Child Promise by its founding co-chair Todd Parnell, a former banker and president of Drury University.

He and wife Betty Parnell, who co-chaired the Every Child Promise and illustrated the cover of the book, donated 100 percent of the proceeds to the fund.

In brief remarks, Todd Parnell held up a photo from former News-Leader photographer Valerie Mosley of a child with filthy feet, which ran with a project on the realities of children living in poverty.

He described Stoeffler as a “crusading editor of a local newspaper who was backed by his publisher, by his staff” and helped to open readers’ eyes.

Parnell said the journalism project helped “attack this culture of denial we had back then and then say, ‘What are you going to do about it?’ This was not a one-time story. This was month after month after month of this kind of stuff that brought it home, to I think everybody, that we had a problem with poverty.”

He added: “The Every Child Promise would not have happened without you.”

The Every Child Promise helped create awareness about early childhood education and create support for expanding access to children, especially for families that struggle to make ends meet.

“We are now giving more and more of our children — our most vulnerable — that good start to learn,” Fogle said. “When you’re ready to learn in kindergarten, you are going to read at grade level by third grade, and you’re going to graduate from high school, which means you are going to be a successful adult.”

“In his absorbing allegory, Privilege And Privation, A Love Story, Parnell weaves a compelling story of two people who come from widely differing circumstances of birth and upbringing. …
Parnell’s storytelling prowess helps us see the need to focus on the assets, rather than the deficits, in each person, and to hold out hope for the future as we seek to maximize the intrinsic worth and gifts of every child.”
–David Stoeffler, former executive editor, Springfield News-Leader and co-founder of the Every Child Promise

“Well written, thoughtful, tells a story that is central to our work. Unique and believable…truly, I think it is beautiful.”
–Emily van Schenkhof, Executive Director, Missouri Children’s Trust Fund

“Todd Parnell’s fictional piece, Privilege And Privation, A Love Story, could not be more true to life for so many families in our society. The story is one of romance coupled with the sobering truth of how inequality can divide us, and the dire consequences it can have on children’s futures. Privilege And Privation has the power to change the narrative and our response.”
–Dana Carroll, Springfield Child Advocate and Director, The Every Child Promise

“More twists and turns than a Stone County highway. Plot twists to keep the reader entertained, but there are profound points advanced. I’ve never read anything like it.”
–Brian Fogle, President, Community Foundation of the Ozarks

Todd Parnell  Todd Parnell is the retired President of Drury University, founding CEO of THE BANK in Springfield, Mo., civic leader, environmental advocate as co-founder of the Upper White River Basin Foundation and recently retired Chairman of the Missouri Clean Water Commission, and award-winning author inducted into the Missouri Writers Hall of Fame in 2012. He holds Masters degrees in Business Administration from Dartmouth University and History from Missouri State University, and an undergraduate degree from Drury University. Parn Learn More about Todd Parnell