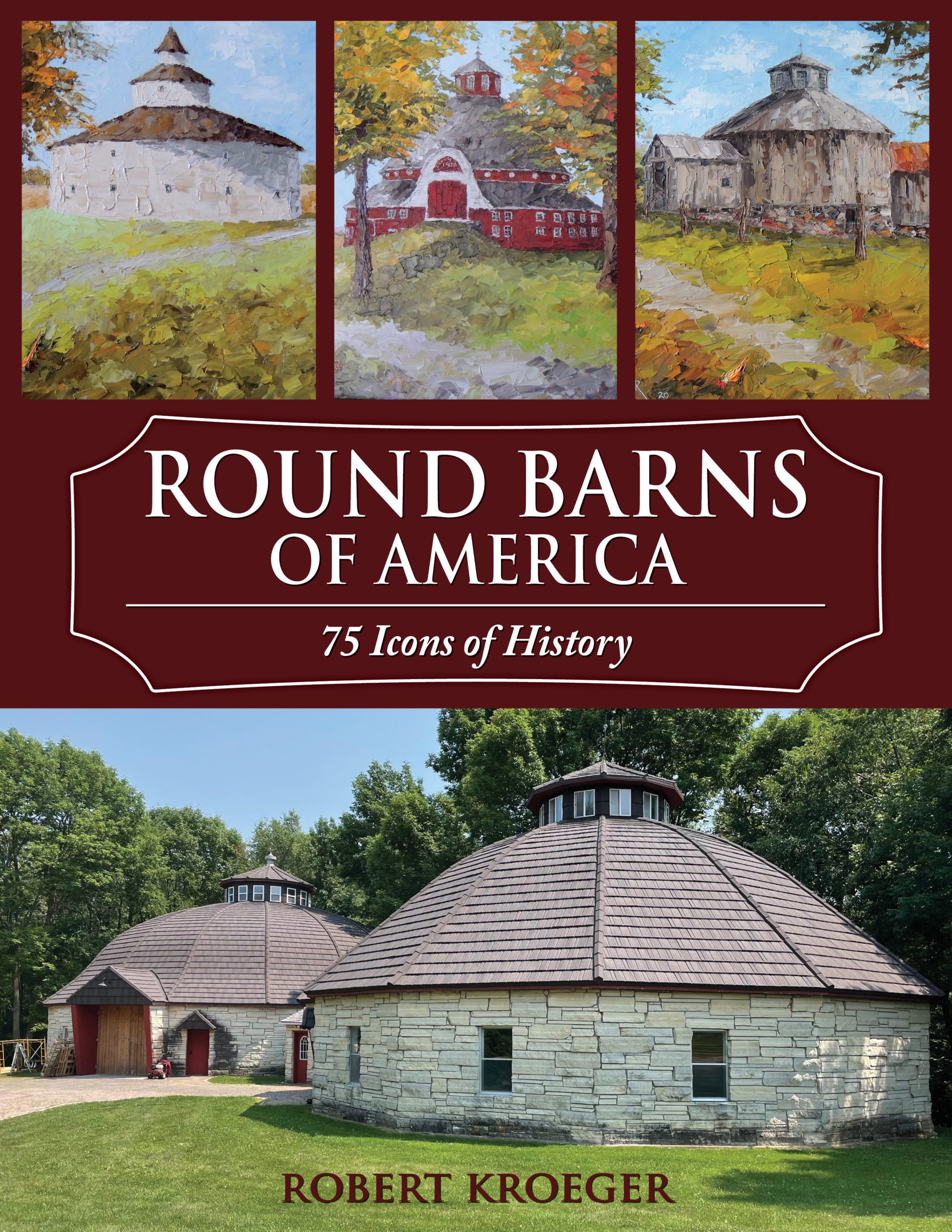 Round Barns of America

Yes, these barns were round or any polygonal shape without a right angle: circular, octagonal, even hexadecagonal. Many—but not all—farmers who built them were affluent, prosperous enough to take a chance on an eccentric shape. Their histories are equally unique.

The oldest existing round barn, a nine-sided one, located in the town of Angelica in western New York, features the story of John Church and his wife Angelica, sister of Elizabeth Schuyler, wife of Founding Father Alexander Hamilton. Did Thomas Jefferson’s love of the octagonal rub off on Angelica, who spent years in Paris with Jefferson? Did President George Washington’s 16-sided barn play a role in Angelica’s design?

Join the author as he documents these curious barns—from the east coast to the west coast—and enjoy the colorful stories, some of them intriguing rags to riches tales such as Absalom Jennings and his Nutwood, the brick round barn, built in 1858 in Ohio, and Schandor Herz, born in Slovakia in the 19th century and raised in Chicago, finishing his years on a sumptuous Kentucky horse farm in Bourbon County and its rare tetradecagonal barn.

Together, these 75 round barns represent a cross section of American pioneers, dating from years before the American Revolution to the glory decades of round barns—1870s to 1920s. It’s quintessential Americana.

Robert Kroeger  Dr. Robert Kroeger, a native of Youngstown, practiced general dentistry from 1977 to 2010, when he retired. He and his wife Laura also live in Cincinnati, where they enjoy spending time with nine grandchildren. He is a second-generation artist, though, unlike his father Francis, who held an art degree from Notre Dame, his professional art career blossomed later in life. Though he did not immediately follow in his father’s footsteps, Robert’s career as a dentist allowed him to study color values and facial esthetic pri Learn More about Robert Kroeger

Many people write a book because an idea insists, or a passion persists, until the quest becomes mission accomplished. Such was the case for Robert Kroeger when he set out to write about Ohio’s historic barns (Historic Barns of Ohio, 2021) and in the process, became captivated by round barns. No wonder,  Ohio has some magnificent round barns.

A passion persisted and now with the release of Round Barns of America, 75 Icons of History, Kroeger has beautifully captured the results of his foray in search of round barns, which includes polygonal barns, some having as many as 16 sides. In this, the only known book solely focused on round barns, he has explored not just throughout his own state, but traveled hither and yon to other parts of the United States. He settled on 75 barns in 32 states to showcase and doesn’t stop at a driver’s license description of each barn, citing merely its age, height, and address. Wonderfully, each barn’s story unfolds with personality and vitality. We learn about a farm and barn given to a girlfriend rather than to an ex-wife, a barn moved from one state to another to become a winery, and even that actors Paul Newman and Joanne Woodward, helped save the only cobblestone round barn in Connecticut.

We are treated to a thorough backgrounding on the history of all-things-round, leading to the building of round barns in 18th century Europe and Scandinavia, the influence of railroad roundhouses on barn construction, and the mathematical determination that an octagon can enclose 20 percent more space than can a square, based on perimeter.

Kroeger includes, in his coffee-table format, full-color book, a chapter devoted to names associated with the actual construction of round barns, something seldom recorded, often overlooked, and lost to time. Alga Shivers was an African American barn builder who learned carpentry and engineering at George R. Smith College in Missouri and went on to build at least 15 round barns, including his own. Benton Steele, of Indiana, remembered as the “Father of Indiana’s Round Barns,” was both a designer and builder of barns and claimed that his round barn was “cyclone proof.” Surprisingly, we even learn of Angelica Church, a New York woman, well-acquainted with both Thomas Jefferson and Alexander Hamilton, who put pen to paper and designed a round barn, later built on family property.

We study images of round barns loved, languishing, or likely soon to leave us. We find round barns that are built into banks, have basements or have multiple levels. We consider whether we might build our own barn of wood, brick, or stone. And, we find round barns have enjoyed differing purposes, among them dairying, blacksmithing, and threshing. We read with delight that some today enjoy new lives as inns, wineries, and homes.

Accompanying Kroeger’s colorful text are equally colorful photographs and his own impasto-technique paintings of the selected barns. A dentist by training, now retired, Kroeger will note with a smile, that he signs his paintings with an instrument he once used in his dental practice.

I am drawn to Kroeger’s beautiful book, but even more to the reason behind his quest to create it – to preserve in some cases, in the only way possible, the images and stories of America’s most important edifices, her nation-building barns. That is a passion I share and applaud him for. Round Barns of America, is a keeper. 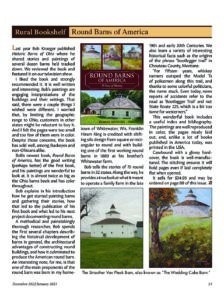