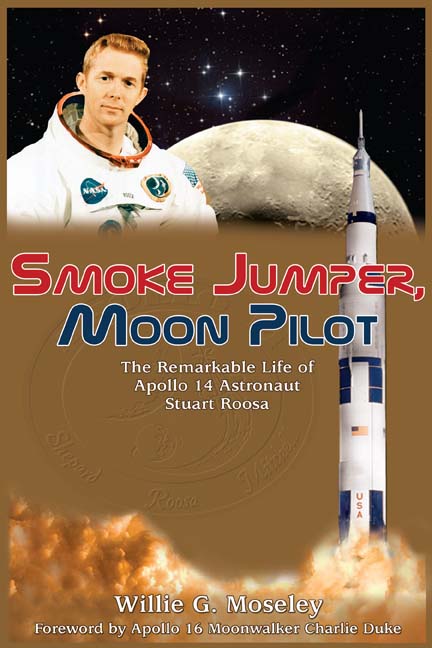 Al Shepard was returning to the cosmos, and this time, he was going to walk on the Moon.

Grounded for most of the Sixties due to an inner ear problem, America’s first man in space had been serving as NASA’s Chief of the Astronaut Office, and had figured into the selection of crews for American manned space flights. Now healthy and cleared for flight himself, Shepard knew who he wanted on his own Apollo crew.

For Lunar Module Pilot, he selected a brilliant Navy aviator, Edgar Mitchell, a.k.a. “The Brain,” who already had a doctorate of science in Aeronautics and Astronautics from M.I.T., and had been highly involved in the design of the Lunar Module.

The Command Module Pilot, who would be responsible for guiding the Apollo spacecraft to the Moon, placing it in a safe orbit, and returning it safely to Earth, was to be Air Force pilot Stuart Roosa.

And Roosa didn’t even have a college degree when he had won his Air Force wings, and hadn’t been on a backup crew for an Apollo flight.

But when it came to piloting skills, he was that good.

Stu Roosa’s life was incredibly diverse—the second son of a government surveyor, he had spent his early childhood in a migratory lifestyle with his family before the Roosas settled in Claremore, Oklahoma, where Stu proved to be an excellent student and developed a lifelong love of hunting.

He became a smoke jumper for the Forest Service before enlisting in the Air Force’s aviation cadet program. Excelling in piloting skills, Roosa had graduated from test pilot school at the legendary Edwards Air Force Base before being chosen as an astronaut.

Roosa loved his family and his country, and he loved to fly. Recollections in this detailed biography include memories from family members, schoolmates, and veteran smoke jumpers, pilots, and astronauts.

Smoke Jumper, Moon Pilot tells the story of a focused, determined, and patriotic youngster who believed in the American dream, and grew up to live it. At the age of 19, Stu Roosa was parachuting into the woods of the Pacific Northwest to fight forest fires.

— He joined the Air Force.

— He became a test pilot at Edwards Air Force Base.

— He was selected to be an astronaut by NASA.

— He became a successful businessman and big game hunter.

This is the family-authorized biography of Apollo 14 Command Module Pilot Stuart A. Roosa (1933-1994). It’s the quintessential, All-American chronicle of the life of an Oklahoma farm boy whose initiative, drive and personal integrity earned him a place among the 24 individuals who made the most dramatic voyage in human history, and it’s a story that needs to be told, now more than ever.

“A great story about a good friend and powerful teammate on our trip to the Moon.”

“Stu Roosa and I were as close as brothers—we were high school buddies, college roommates, spent a summer in a tent together in Idaho, and were smoke jumpers.  Later, I followed his career as he journeyed to the moon.  This book accurately chronicles Stu’s memorable American success story.”

“Often forgotten in the media spotlight placed on those who walked on the moon, the Command Module Pilots–the Apollo astronauts who stayed behind in lunar orbit–achieved just as much. They frequently spent days alone,conducting pioneering science experiments and watching the majestic earth rise above the ancient, battered lunar surface. Stu Roosa was one of the very few to have this other worldly experience, and Willie Moseley vividly brings his story to life.”

-Francis French, author, In the Shadow of the Moon

“Wantto get inside the mind of a true blue, red-blooded astronaut? I’ve met dozens, and after reading Moseley’s book, I finally know one from the heart.”