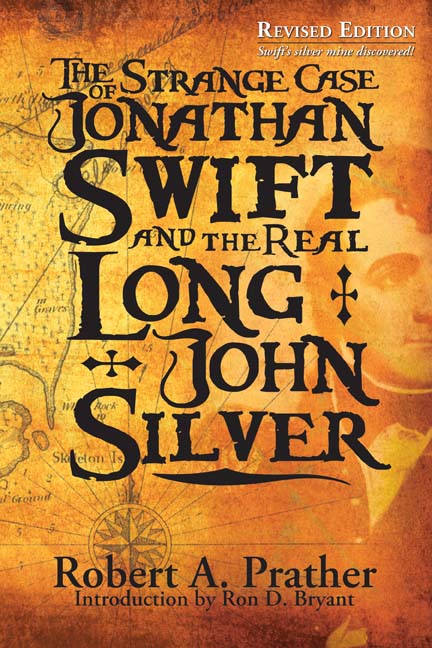 Strange Case of Jonathan Swift and the Real Long John Silver, The

Could this most famous of fictional pirates be actually based on the life of a real man? And could that man be one Jonathan Swift of Alexandria, Virginia, an enigmatic merchant whose legendary silver mines have enticed and eluded treasure hunters for over two centuries?

From ancient maps, documents and charts, to personal diaries and secret Masonic archives, author Robert Prather boldly delves into both the mystery and legend of Swift, as well as the probable connections with Robert Louis Stevenson’s classic adventure, Treasure Island.

Filled with intrigue, deception, cryptic codes and buried treasure, this provocative look into a fascinating segment of literary and American history will ready even the casual reader to set sail for plunder and riches.

The third edition of The Strange Case of Jonathan Swift and the Real Long John Silver by Robert A. Prather is a brilliant work that combines historical facts with fiction to offer an investigation that will “wow” readers. Treasure Island is loved by young and old alike, and not only by Americans but readers worldwide, a classic with immortal characters. And who could forget Long John Silver with his cunning and dubious character,and the mysterious aspect of his nature? But what if he isn’t fiction? What if he was blood and flesh, a historical personage? This is the question that Robert A. Prather answers brilliantly, offering clues and facts that point out in a very convincing way that Robert Louis Stevenson’s revered character could have been based on the legendary merchant, Jonathan Swift of Alexandria, Virginia.
Those who have read Treasure Island and have fallen in love with its characters as I have will enjoy Robert A. Prather’s The Strange Case of Jonathan Swift and the Real Long John Silver, an investigation that is as intriguing as it is enjoyable. Readers are introduced to one of America’s old legends: Jonathan Swift. His legendary gold mines have been a subject of interest to many, but did they really exist? Could Swift’s journal entries be believed or were they written after Treasure Island? The answers that readers will find in this book are surprisingly interesting. The author must have spent considerable time doing research, and it is beyond doubt that he knew where to look while researching this work. The writing is elegant, tight, and highly seductive. Prather is a master at helping readers draw the line between history and fiction while igniting in them a silent yearning for adventure.
-Reviewed by Romuald Dzemo for Readers' Favorite

“A fascinating, thought-provoking look at the legendary lost Swift mine and its possible parallel to Robert Louis Stevenson’s classic, Treasure Island. Put aside everything you’ve come to believe and allow Prather (the author) to expand your thinking. A thoroughly enticing read for inquisitive treasure hunters everywhere!”

“An intriguing narrative, fully researched and illustrated, setting in motion a provocative tale of lost treasure and encoded clues contained in Robert Louis Stevenson’s epic tale. Robert Prather has shed new light on Treasure Island and will be the topic of much debate.”

“This intimately researched work results in a fascinating and spellbinding trip beginning before the birth of America and drops the reader in the present day thirsting for the future. I was convinced and find myself looking to buy a metal detector to roam the hills of Kentucky in search of Long John Silver’s trove. “

Historian Robert Prather carefully compares the legend of Jonathan Swift’s lost silver mine to the saga of Long John Silver in Robert Louis Stevenson’s Treasure Island. His research uncovers clues woven into Stevenson’s masterpiece that will likely keep treasure hunters such as me energized for decades to come. Prather extracts just enough facts from the folklore to make me believe that there just might be a vast silver trove cached away in the caves of Kentucky. The depth of Prather’s research is impressive, as he has tapped into such guarded documents as the minutes of the early Alexandria-Washington Masonic Lodge. Stevenson’s Treasure Island was the stimulus for my lifelong desire to pursue treasure with metal detectors. Now, the enticing details in The Strange Case of Jonathan Swift and the Real Long John Silver have added more fuel to that fire.

enjoy writing book reviews in this column from time to time, particularly if the book is by a Kentucky author, focused on eastern Kentucky and so interesting that I found myself propped up in bed, still reading, three hours after I should have gone to sleep.

The Strange Case of Jonathan Swift and the Real Long John Silver by Robert A. Prather met all those requirements and then some!

Robert Prather and his wife, Karen, have run their own commercial business in the Meade County community of Garrett for more than 40 years. He is also a historian active in numerous historical and archaeology societies and a field editor for Acclaim Press.

My attention to the book was first drawn when I heard that Robert was from Garrett. I wrongly assumed that he was from Floyd County. Turns out there are two Garrett, Kentucky’s that, I suppose, is another good reason for zip codes.  Prather’s Garrett is located just a few miles from Fort Knox but that doesn’t mean that he doesn’t know his eastern Kentucky history.

The book is focused on the lost treasure of Jonathan Swift and his silver mine, legends of which have run rampant in eastern Kentucky for well over 200 years.In fact, Wolfe County KY has a historical marker regarding Swift’s Silver Camp that used to sit in front of the old Courthouse in Campton.  I assume it’s still there.   Wolfe County even has a Swift’s Silver Mine Festival over Labor Day Weekend every year.  I’m sure it’ll be happening this year, too.

Prather’s book tries to separate fact from fiction and I promise you faithfully that you will not find a more thoroughly documented accumulation of information about the life and times of Jonathan Swift and his supposed treasure than what is contained in this book. Nor will you find a more intriguing set of questions as to where the mine and/or treasure is actually located.

I am not a treasure hunter and I have always been skeptical that the legend was nothing more than oldwife’s tales.  As Prather points out, there are no fewer than 40 documents hanging around that are purportedly the original or hand copies of the original journals on which the legend are based.

Prather suggests that the treasure mine or mines did exist, but not necessarily in eastern Kentucky.

He documents, beyond doubt, several large land holdings owned by Swift in both eastern and north-central Kentucky as well as northeastern Virginia. He makes a most convincing case that the same Jonathan Swift mined for silver in at least 4 different locations, including eastern KY and that he was, indeed, a frequent visitor to the state during the 1790s.

The final section of the book devotes 75 pages to a strong case that Robert Louis Stevenson’s famous novel, Treasure Island was based the same Jonathan Swift’s  lost treasure and that the books main character, Long John Silver, is actually modeled from our main man, Jonathan Swift.

But I was gut hooked by the book because it contains several hundred excerpts from historically accurate documents including newspaper articles, letters, deeds, indentures, and references from many other books and published articles on the subject.  Treasure seeking, not withstanding, If you are remotely interested in Kentucky history, this book is a must read because you will discover many facts you’ve never read before.

The Strange Case of Jonathan Swift and the Real Long John Silver is hardbound with a beautiful, award-winning, dust jacket, 376 pages including 58 pages of appendices and other documentation.

Robert Prather Speaking at the Franklin

A Gold Mine - The News Enterprise