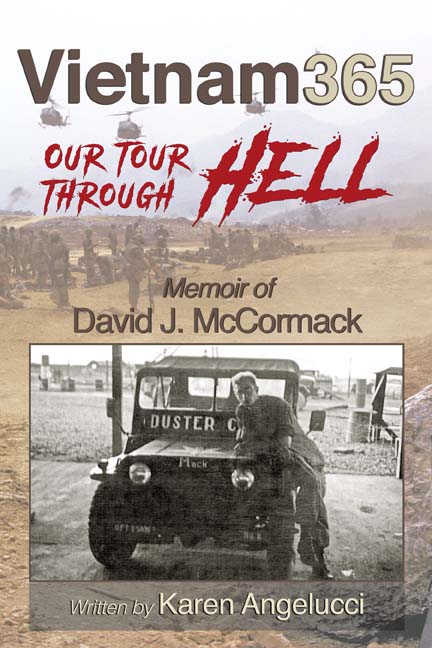 Vietnam 365: Our Tour Through Hell

Vietnam 365 – Our Tour Through Hell is an honest reflection of one man’s tour of duty in Southeast Asia…the true story of Spec-5 David McCormack, who left his home in Elizabethtown, Kentucky to serve with the Headquarters and Headquarters Battery, 5th Battalion, 2nd Artillery Automatic Self Weapons group located on Duster Compound, attached to 30th ARVN Rangers and a Navy Seal A-TEAM of 5th Special Forces.

A master mechanic, McCormack was assigned to the Duster Compound near Ben Hoi as the personal driver and courier for the head of the Battalion Deployment and Recovery Division, Chief Silvers, the man who taught him how to survive a year running the “Thunder Road” throughout the region, avoiding threats from both enemy combatants and dishonest American officers.

Known as “Billy the Kid” for his fearless attitude, McCormack shares what life was really like for those who served in Vietnam from 1970-71, where the threat of death could come at any time, and Hell seemed like home for 365 days.

Excerpts from the book:

“…I could put you on as a Duster crewmember, but within 90 days you will be dead or going home on the hospital flight with body parts missing. You will be a total basket case, most likely living in a wheelchair for what life you have left. I’m going to give you sixty seconds to make a decision — work for me no questions asked, or go on a Duster crew…Time’s up. What is your answer?”

“Sir, I will work for you, no questions ever. I am here to serve you and my country sir.”

The 30th Tiger commander began to speak using broken English, “If all military men fight like ‘ill billy from ‘tucky, we would be home in six months…I now honor you Mackie as my Tiger Ranger of my 30th Rangers!”

“You have to have a good nickname…we are going to name you ‘Billy the Kid…(he) was totally crazy, (and) you are totally crazy for coming in here alone without the Quad 50 escort. Billy the Kid had two guns, the lever rifle and his pistol. You have the rifle and the 79,” he paused smiling, “Two guns!”