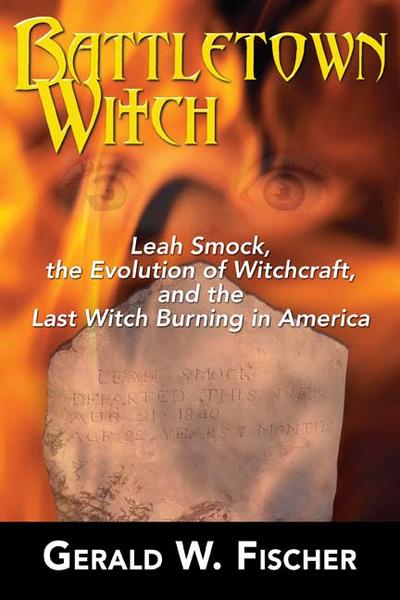 Leah Smock, the Evolution of Witchcraft, and the Last Witch Burning in America

For more than 175 years, many folks who wander the woods near Battletown, Kentucky have seen the ghost of Leah Smock, who was burned as a witch at the age of 22 in August 1840. Enveloped in a purple glow, her spirit stands beside her grave, wearing a long white robe…her black hair flowing as if in blown by the wind.

Battletown Witch tells the story of Leah Smock, the legend of her supernatural powers and death at the hands of neighboring families. It also tells about the socio-economic environment of the area in which she lived and died, and as much as is known about her family, death and afterlife.

The book also explores the evolution of witchcraft from early beliefs, superstitions and cultures across the world, primarily in Europe, and how these beliefs influenced life in the early American colonies.

Battletown Witch is a fascinating look at how fear of witchcraft and community gossip led to the death of a country girl nearly two centuries ago, and how her legend still lives today.

Steve Flairty grew up feeling good about Kentucky. He recalls childhood day trips (and sometimes overnight ones) orchestrated by his father, with the take-off points being in Campbell County. The people and places he encountered then help define his passion about the state now. After teaching 28 years, Steve spends much of his time today writing and reading about the state, and still enjoys doing those one dayers (and sometimes overnighters). “Kentucky by Heart” shares part and parcel of his joy. A little history, much contemporary life, intriguing places, personal experiences, special people, book reviews, quotes, and even a little humor will, hopefully, help readers connect with their own “inner Kentucky.”

In the woods near the small rural community of Battletown, in Meade County, many people say they have seen a ghost. The ghost, they claim, is Leah Smock keeping an eye on things around the place where she was burned as a witch in 1840. She seems to be in full control these days, as her gravestone is hidden way off back in the woods, guarded by poisonous snakes. She occasionally appears—majestically in her “white robe, dark eyes and long raven tresses,” says the story teller.

And whether one believes in witchcraft or not, such matters through history have moved people to act in response to their own fears on the issue, as author Gerald Fischer writes in his newest historical book offering, Battletown Witch: Leah Spock, the Evolution of Witchcraft, and the Last Witch Burning in America (Acclaim Press, 2016). Not only does Fischer bring to remembrance the circumstances leading to the murder of Smock in the Kentucky frontier near the Ohio River, he surveys the societal emergence of such “early beliefs, superstitions, and cultures across the world, primarily in Europe, and how these beliefs influenced life in the early American colonies.”
Besides the Meade County account of Leah Smock’s death, Fischer reports on other events regarding witchcraft hysteria around America. In 1813, one happened in Kentucky’s Barren County, now part of Hart County. Mary Edwards was accused of witchcraft by people in her church and though she was acquitted and not physically harmed, the result of the proceedings divided the congregation after a long and contentious battle.

In Paducah, two women were found guilty of witchcraft in 1829. According to the account, both of them made it out of the fire intact but were soon put back into the inferno by the perpetrators. When again they exited the flames without being consumed, the crowd gathered called for the two people’s safety and they were saved. Two years later, a woman from eastern Kentucky’s Letcher County was said to be a witch “who could charm guns, dogs, and other animals,” and who had a son who would “fire his gun at the sun, cursed, and blessed until the ground would tremble and shake and thunder began to peal.”

Though no year is mentioned in the 1800s, John A. Black, Rowan County, was believed capable of turning himself into any animal. “Legend has it,” reported Fischer, “that John was killed by his youngest son, Willie, while John was in the form of a huge black dog that was chasing Willie’s horse.”

Arbor Day has passed, but the annual recognition of trees and their importance again reminds me of my life-long interest in them.
Even in my primary school years, those little “helicopter seeds” coming off the large maple tree in front of Grant’s Lick Elementary fascinated me. I enjoyed throwing those brown winged things up in the air and watching them spin back to the earth. And for a short time, I actually entertained thoughts that I, Stevie Flairty, discovered this natural toy and needed to share what I found with the world—until I learned about them later while reading science books.

I recall sticking orange seeds, for curiosity’s sake, into potting soil with another of Mom’s household plants—then forgetting about them until nearly a month later, when I noticed the glossy green plant emerging. The little orange tree made a nice conversation piece around our Claryville home until I tried planting them outside, where life happened and they, well, didn’t make it.

As I got a few years older and into my teens, I remember looking for white dogwood trees in Homer and Betty Owens’ woods. My encyclopedia research (yes, before the Internet), plus talking to some old-timers and nursery people warned me that the dogwoods were a bit hard to transplant and raise successfully. Over the years, I found that to be true, but a few did survive on our small farm. Strange that my semi-successful dogwood tree planting was a subject of some juvenile bragging rights, but I guess that’s better than driving a car on Highway #27 at 80 miles per hour, which I once did after I received my driver’s license.

Later, my first teaching job at Trapp, in Clark County, saw me involve some of my special education students in a tree project on ten acres of land I owned on Pine Ridge Road, near Trapp. As I remember it, I ordered 500 scotch and 100 pines at a cheap price from the state of Kentucky and took some of the kids out there to help me plant them. A few years ago, I revisited the land I had long sense sold and found no evidence of the trees, even though it remained mostly undeveloped. Guess I should stick with other types of trees.

Most recently my tree passion reignited with the one acre lot my wife and I own in Versailles. The lot was stocked nicely with a dozen or so mature trees. Sadly, I had to put two mature ash trees and an Austrian pine, all sick, down shortly after moving there. Since then, however, I’ve planted four dogwoods, two tulip poplars, a Kentucky coffeetree, a red bud, a red maple, and a Japanese maple. I take pride in knowing that all are Kentucky-like trees, except for the Japanese one. Perhaps I might make the state connection for the Japanese maple by calling it “the Toyota tree.”

Regardless, I look forward to daily walks around God’s Little Acre and checking on my little forest. At some point when the emotions get really high, you might even catch me hugging one. Please forgive me.

If you have a historical bent and are intrigued about the fascinating past of the little corner of Kentucky known as Meade County, you will love this book. Gerry Fischer is an indefatigable researcher whose knowledge of this area never ceases to amaze me. And, of course, the story of Leah Smock is a timeless one, featuring a mixture of occult knowledge, innocence, and fear. He puts her story in the context of the pioneers, Native Americans, and religious fervor of the times. Sit yourself down in a comfy chair by the hearth and prepare to be bewitched!

Who says that witches don’t exist? Read Battletown Witch and decide for yourself. Author Gerald Fischer examines the supernatural through historical documentation and research to tell the story of Leah Smock, a Meade County woman burned as a witch in 1840. Her apparition has often been seen at her grave site and roaming the woods of Battletown, Kentucky. The book is full of these stories as well as how witchcraft migrated to the colonies and was influenced by Native Americans, slaves, and the Haitian Revolt of 1794.

After reading Gerry’s first book, Guerrilla Warfare in Civil War Kentucky, I became a fan! His writing style, thoroughness of research and presentation holds the reader’s attention and expands their knowledge of the subject presented.

A notable historian and author, Gerry Fischer’s love of history is evident in every story he tells. His passion for the past is reflected in his research as he brings his stories to life by bringing history into the present.

-Kay Hamilton, Author of A Ghost in Our School

Gerry shows his love of history and story telling in this book, and with his usual flair he shares the story of a poor misunderstood girl. He gives us much food for thought without any calories in a very special story told about an apprehensive time in our history.