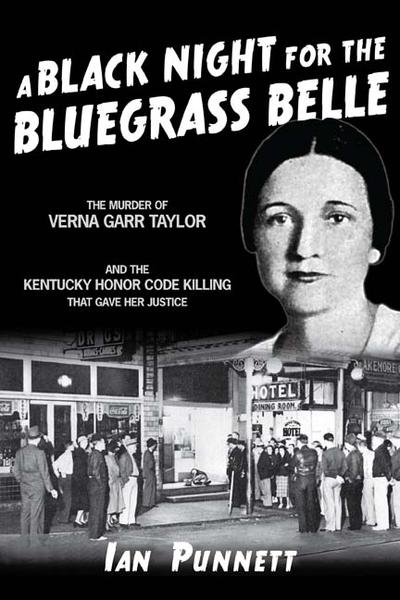 A Black Night for the Bluegrass Belle

On November 6, 1936, 40-year-old Verna Garr Taylor of LaGrange, KY, was found dead in a soggy ditch just over the Henry County line. Her companion that night, 60-year-old Henry H. Denhardt, the sitting adjutant general of the Kentucky National Guard and recent lieutenant governor of the Commonwealth of Kentucky, insisted that Verna had spontaneously committed suicide with his gun on the same night she tried to return his engagement ring. Because of a series of macabre, bizarre, and sometimes laughable events, “the Iron General” would never be held legally responsible for the murder of this beautiful, honorable widow and businesswoman. But that does not mean that Denhardt was innocent.

Just in the time for the 80th anniversary of this tragedy, Ian Punnett—who resigned as host of the most listened to overnight show in North America to pursue a PhD in journalism and mass communication—has uncovered the final missing, convincing details that bring A Black Night for the Bluegrass Belle to life. As part of the Commonwealth of Kentucky book series by Acclaim Press, Punnett also reveals the unknown truth behind Denhardt’s ignoble demise, a death that is considered the last “code of honor” slaying in Kentucky history.
Through storytelling skills honed as a veteran radio personality on the nationally syndicated Coast to Coast AM, a PhD candidate at Arizona State University, and an instructor of Multimedia Journalism at Ohio Northern University, Punnett crafts every chapter of this murder-to-trial-to-murder-to-trial nonfiction narrative with evocative historical detail and the passion that is only possible from a family member. Punnett’s maternal grandmother was Verna Garr Taylor’s first cousin and confidante. As a result, Punnett has access to family insight no other author can claim.

Ian Punnett learned a lot about writing true crime from my mother. Lesson #1: Give the victims a voice. Not long before my mom died, we were all in her kitchen talking about this story and what it meant to Ian to bring justice to Verna Garr. I think Mom would be proud.”
-Leslie Rule, novelist, author of Where Angels Tread: Real Stories of Miracles and Angelic Intervention, and daughter of Ann Rule, bestselling author of 45 true crime titles, "the Queen of True Crime."

“Everybody knows I love a good mystery, but we need to solve the ones we can. Finally, the whole truth about Verna Garr Taylor’s murder is told by a compelling storyteller on any platform; a great read by my friend, Ian Punnett.”

“LaGrange, Kentucky is one of my favorite eccentric towns. From the author’s introductory notes and first chapter, this book gripped me, and drew me in.”

-Charles Pellegrino, forensic archaeologist, and best-selling author of Ghosts of the Titanic, Ghosts of Vesuvius, and expedition scientist of Ghosts of the Abyss and Aliens of the Deep with director James Cameron.