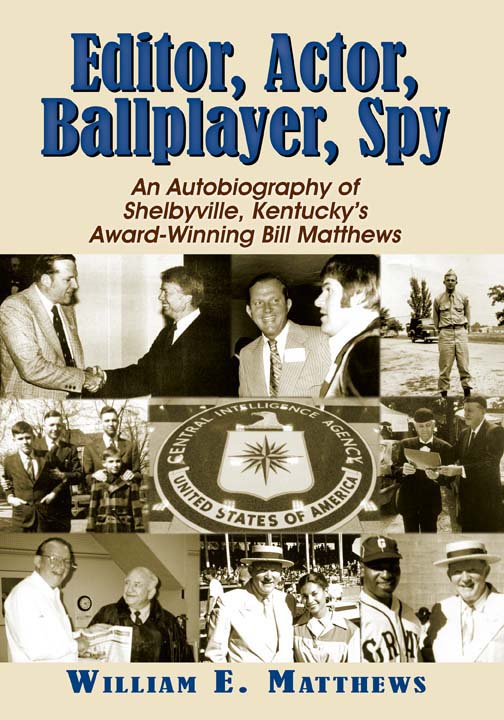 Born in 1930, the youngest of three sons, William E. Matthews has lived a life fuller than most. After serving as a lieutenant in the U.S. Army, Bill worked for ten years in the Central Intelligence Agency (CSI) on such cases as the Hungarian Revolution (1956), the Bay of Pigs (1961), and the Cuban Missile Crisis (1962).
Bill went on to work in the Kentucky newspaper business for 52 years, during which time as an editor and publisher her won the Media Award from the Kentucky Historical Society three straight years (2003-2005), represented Kentucky’s daily and weekly newspapers at two White House Conferences on rural journalism during the Carter administration, and served as president of the Kentucky Press Association in 1977.
He launched the first weekly sports magazine featuring a professional baseball team (Cincinnati Reds), and appeared in two movies as an umpire – “A League of Their Own,” starring Tom Hanks, and HBO’s “Soul of the Game.”
Editor, Actor, Ballplayer, Spy tells the life story of Shelbyville’s own Bill Mathews, as well as the dozens of other men and women who have made a difference in this little community through the years.

“Bill Matthews was my net or in every way. He taught me to think big, to go after my dreams, and to accomplish whatever I wanted to do. I doubt that I would be a physician today without the influence of Bill Matthews.”

“Mr. Matthews: I just want to tell you him much I have enjoyed all your books. I am looking forward to reading this one as well.”