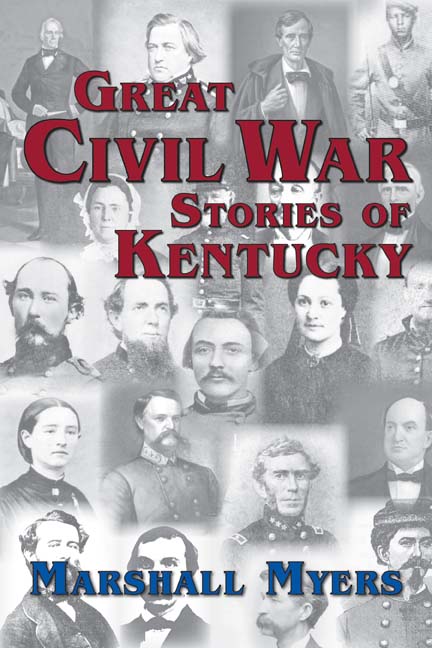 Great Civil War Stories of Kentucky is a fresh look at the “War Between the States” and the role of Kentuckians in the conflict. This book contains a collection of engagements, incidents, colorful characters, and even lighter moments that have thus far been overlooked by scholars and historians.

Author Marshall Myers brings us accounts of Kentucky personalities such as George St. Leger Grenfell, Adam “Stovepipe” Johnson, Lightnin’ Ellsworth, African American Hero Andrew Jackson Smith, and Loreta Velazquez (the man who was a woman), to name a few. The book also includes stories about the lives of Kentucky Shakers during the war, religion, the Louisville Civil War prison, the Orphan Brigade, and other stories about life and living in this state that fell between north and south, including a collection of stories about native Kentuckian Abraham Lincoln.

Now 150 years after the first shots of the Civil War were fired, Great Civil War Stories of Kentucky reminds us of the harsh realities of war, and how it affected soldier and civilian alike.

Kentucky truly mirrored more than any other state the idea of the Civil War as an internecine conflict, brother against brother, so much so that in many families, it was literally true, often with two brothers siding with different causes, even father and son splitting their family’s allegiances.

Even though Kentuckians and scholars of the war have rightfully written much about the highlights of the conflict in the state, countless episodes and incidents, colorful characters, and even lighter moments have been largely overlooked. The stories of the Civil War in Kentucky, with its unique conglomerate of people and places caught in four years of chaos, will undoubtedly provide a rich vein of ore for many years to come.