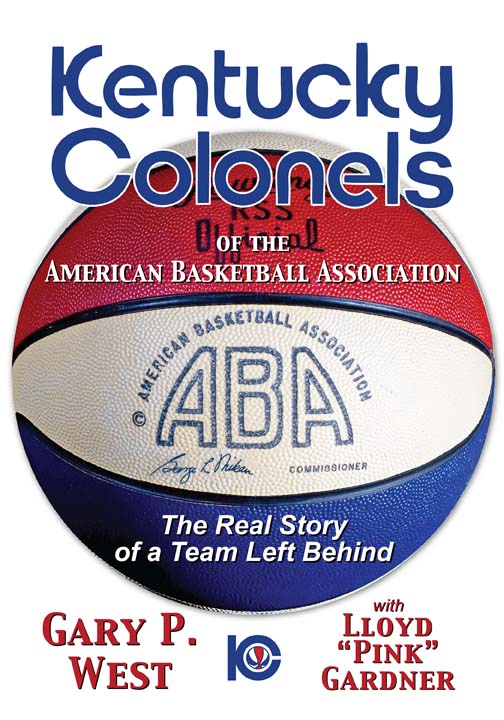 The Real Story of a Team Left Behind

Kentucky Colonels of the American Basketball Association: The Real Story of a Team Left Behind gives an inside look at one of the most intriguing times in the history of professional basketball; and the city of Louisville and the state of Kentucky were enjoying every bit of it.

And then as quickly as the Colonels appeared, they were gone. They had been around just long enough to win a world championship and showcase not only some of the best basketball players in the history of the game, but also some of its most colorful characters.

Perhaps this book should have been written years ago, but there always seemed to be plenty of time. And then one day, a generation or two removed, someone asked what happened to that pro-basketball team back in the 60s and 70s?

BAM, it hits you. This book had to be written.

Here are never-before-told stories that only Lloyd “Pink” Gardner would know. He lived it and Gary P. West wrote it.

A story of colorful owners with family connections to the Lindbergh kidnapping and Hope Diamond; sports agents who would do anything to sign players; a double murder and suicide; a businessman who thought he could do in basketball what he had done with Kentucky Fried Chicken; an insignificant T.V. deal that turned into hundreds of millions of dollars; a team that drafted a 5’6”, 55-year-old college professor; and through it all still won a world championship.

Gary P. West  Gary P. West has simple criteria when it comes to writing books. “I only take on a project that I will enjoy writing about and I only write about something I think people will enjoy reading,” he says. West grew up in Elizabethtown, Kentucky and attended Western Kentucky University before graduating from the University of Kentucky in 1967 with a journalism degree. At U.K. he was a daily sports editor for the Kentucky Kernel. Throughout his extensive career he has served as executive director of the Hillt Learn More about Gary P. West
Lloyd Gardner
Learn More about Lloyd Gardner

“There is no doubt in my mind that the Artis Gilmore, Dan Issel led 1975 ABA Champion Kentucky Colonels would have been heavy favorites to beat the Rick Barry, Jamaal Wilkes led Golden State Warriors in a Unification Title Series. I would have watched and cheered out loud for the ABA.”

“The Kentucky Colonels franchise was among the best in professional basketball. They always had competitive teams with exceptionally talented players. Because of the large crowds, I always looked forward to playing in Freedom Hall.”

“An affectionate and authentic look at the late, great ABA from someone who truly lived it.” – Bob Costas, Broadcaster