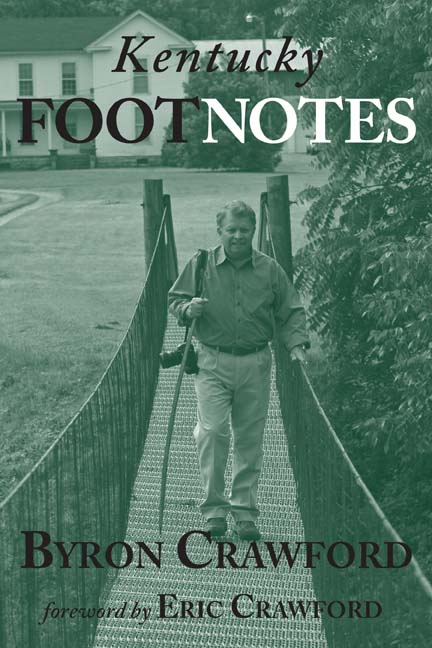 Kentucky Footnotes is Byron Crawford’s third compilation of columns originally published by The Courier-Journal, where he served as the newspaper’s Kentucky Columnist for nearly three decades.

His first two books, Crawford’s Journal, published in 1986, and Kentucky Stories, in 1994, have sold thousands of copies and remain popular among lovers of Kentucky lore.

The San Francisco Chronicle once described Byron as The Courier-Journal’s “muddy shoes reporter,” and the late Charles Kuralt of CBS News proclaimed him “the best storyteller in Kentucky, if you count only the ones who tell the truth.”

In Kentucky Footnotes, readers will find a memorable collection of some of the stories that helped make this Hall of Fame journalist among the most widely-read writers at The Courier-Journal.

“I’ll not forget Byron Crawford. He had a special place in his heart for the Kentucky author Janice Holt Giles. He was there for us in the beginning when he wrote of the need for the log house and the memory of Janice and Henry Giles to be preserved. Thank you, Byron.” – Libby Hancock, Santa Fe, New Mexico, daughter of Janice Holt Giles

“If you want to learn Kentucky, read Byron Crawford’s book of his columns.” – James Ausenbaugh, former State Editor of The Courier-Journal and professor of journalism at Western Kentucky University

“This book conﬁrms two facts I’ve always known to be true – Kentucky is the center of the universe, and Byron Crawford was the reason to buy a newspaper.” – Bob Edwards, former host of NPR’s Morning Edition, and host of XM Radio’s Bob Edwards Show