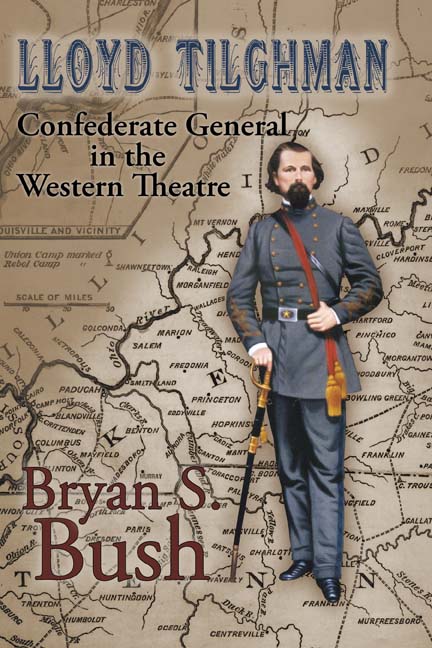 Confederate General in the Western Theatre

Bryan Bush’s latest is the first detailed biography devoted entirely to capturing the story of one of the South’s forgotten but distinguished sons. The book relays the life of Lloyd Tilghman: West Point graduate, soldier, engineer, family man. Coming to build a railroad, the talented engineer settled in Paducah, Kentucky in 1852, with his wife Augusta and their eight children. With the advent of the Civil War, the Mexican War veteran followed his convictions south, becoming a Colonel of the 3rd Kentucky Infantry. Many of the members of the Kentucky State Guard followed him. Promoted to Brigadier General, Tilghman assumed responsibility for the strategically important rivers in Western Kentucky and Tennessee. Guarding the Gateway into the South by holding Ft. Henry on the Tennessee River, Tilghman fought overwhelming odds against Commodore Andrew Foote and General U.S. Grant. Succumbing to naval firepower, Tilghman surrendered Ft. Henry. Taken prisoner, he was later exchanged, becoming an infantry brigade commander. During the Battle of Champion’s Hill on May 16, 1864, while directing artillery fire, Tilghman was struck by a shell fragment and killed, ending a promising military and civilian career.