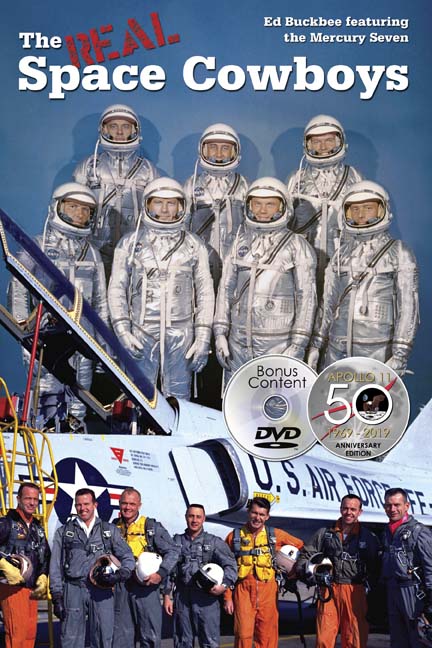 The Real Space Cowboys tells the story of America’s Mercury 7 astronauts, who volunteered to be the first to explore the unknown perils of spaceflight beginning in the late 1950s.

The book also tells the story of the twelve brave Moonwalkers who actually landed on the Moon, Wernher von Braun and his team of rocket scientists who developed the technology to propel men and materials into space, the Russian Cosmonauts and Chinese Taikonauts who helped fuel the competitive space race, plus humorous stories about the pranks and goofs the Mercury 7 enjoyed to pull on each other.

Written by Ed Buckbee, a public affairs officer under Wernher von Braun who founded U.S. Space Camp and was personal friends with the Mercury 7, The Real Space Cowboys is a fitting tribute to the origins of manned space flight and the men who blazed that trail into the unknown.

With the 50th Anniversary of the first Moon landing scheduled for July 20, 2019, now is the perfect time to reflect on these great pilots as future pioneers plan new adventures in space flight.

“As one of The Real Space Cowboys, I can assure you this is the real story of me and my fellow astronauts.”

“Going into space was an easier challenge for Daddy than constantly being in the public eye. He enjoyed his privacy and had to learn how to handle always being recognized.”

“The enduring spirit of exploration is in all of us. My father’s dream was that space exploration could bring the people of all nations together in the peaceful pursuit of knowledge and wisdom.”

“Ed Buckbee, a NASA spokesman for the Mercury, Gemini and Apollo astronauts, shares his experiences with America’s early space flyers.”

“Levity is the lubricant of a crisis. We resort to jokes, pranks and good-natured kidding to relieve tension, stress, and boredom.”