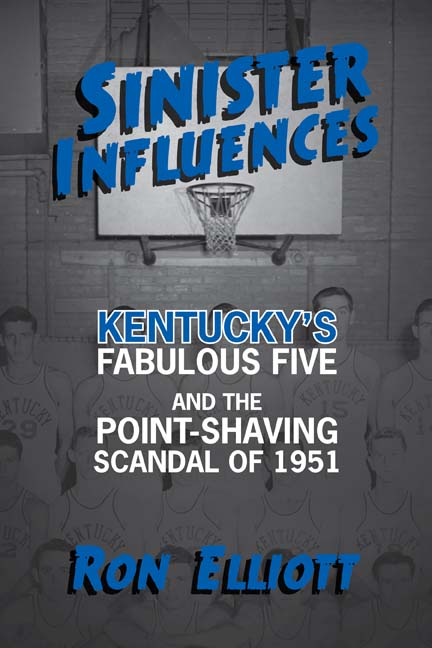 Kentucky's Fabulous Five and the Point-Shaving Scandal of 1951

The passion that is University of Kentucky basketball’s Big Blue Nation is not a recent phenomenon. In fact, fans’ maniacal devotion to the ‘Cats traces back to Coach Adolph Rupp’s early days at UK in the 1930s. As Rupp grew into his job, his teams steadily grew more formidable until they became nearly invincible in what came to be known as UK’s “glory years,” 1946-1951. In that time frame, Kentucky’s Fabulous Five merely: won the National Invitational Tournament (NIT), which was considered the national championship at the time, once; finished runner-up once; won the National Collegiate Athletic Association (NCAA) Tournament three times and could have won it a fourth time and formed the nucleus of the United States Olympic team which won the Gold Medal.

Then, on a crisp October day in 1951, the roof caved in. Authorities arrested the stars, Ralph Beard and Alex Groza, on charges of conspiring with gamblers to “shave points” as the “fixers’” felt that UK’s teams were talented enough to win by any chosen margin. While that activity was poor ethics anywhere, it was illegal in the State of New York. As many of Kentucky’s games were played in Madison Square Garden — “The Mecca of College Basketball” — the players were guilty of a serious crime.

Although UK was the highest profile team involved, the point-shaving scandal was not limited to them. Before it was over, 30 players from seven schools were implicated. Later, more Kentucky players, most notably Bill Spivey, were caught in the net and came under the jurisdiction of an ambitious New York District Attorney and a vindictive judge.

Ron Elliott recreates the charged atmosphere inside UK’s old Alumni Gym where the ‘Cats steamrolled to 84 consecutive victories and recounts the thrilling action of the big games in Madison Square Garden. Sinister Influences also provides statistics for the big games and the player’s careers as well as many previously obscure details of the point-shaving scandals which cost the players their vocation and nearly prematurely ended Coach Rupp’s fabulous career.

Ron ElliottRON ELLIOTT, a native of Lincoln County, Kentucky, is a graduate of Stanford High School, Eastern Kentucky University and the University of Kentucky. Ron’s background includes working on the historic Apollo missions and a stint on Kentucky’s community college system faculty. Having a relative involved in the assassination of Kentucky’s would-be governor, William Goebel, piqued his interest in history and launched a writing career. A much-in-demand member of the Kentucky Humanities Council Speakers Bureau, Ron is the author Learn More about Ron Elliott

“I’ve been reading your manuscript.  Confession upfront: I have absolutely no interest in basketball (I know I live in Kentucky and that’s a capital offense) and getting myself to read it has been tough.  That said, it reads (as I suspected) incredibly well, is chock full of information, and the narrative flows really well.  I love it and I see no reason why everybody won’t.”