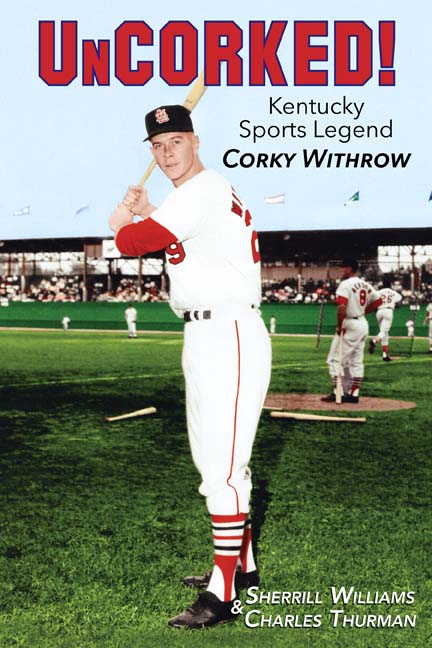 UNCORKED! is the true story of two-sport legend Corky Withrow of Central City, Kentucky, one of the greatest high school basketball players in the Commonwealth who went on to play professional baseball with the St. Louis Cardinals. Authors Sherrill Williams and Charles Thurman take the reader on a journey to 1950s Kentucky, where small-town high school basketball was king and Corky was known as one of the best. The book describes, in detail, the hard-nosed, hard-fought battles on the court and the thrilling action of the nation’s second most successful program in wins. The book also presents Corky’s time in professional baseball, including his struggles in the minor leagues and his time in the big show playing alongside St. Louis great, Stan Musial. With UnCorked!, readers will gain an appreciation for the hard work, and raw talent, of one of the state’s best athletes of all time and member of the Kentucky High School Basketball Hall of Fame–Corky Withrow.

I used to really enjoy the following baseball. I still do, but not as much as I did before. I still enjoy a good book about a former pro baseball player.

AND, I love books about guys who, well, didn’t exactly go on to be Hall of Famers. I think we all know the stories of Ruth and Mantle. I love hearing stories about guys struggling through the minors. I want to read about someone who had his cup of coffee in the Majors and then had a career in something else later on in life.

UnCORKED! Kentucky Sports Legend Corky Withrow by Sherrill Williams and Charles Thurman is one of those books.

PLUS, it is a book about a guy who grew up in Kentucky. He hung out in some of the same areas I did (just, many years earlier).

UnCORKED! tells about Central City Kentucky’s Corky Withrow. Most of the first part of the book follows Corky through his superstar high school basketball career. I especially enjoyed reading about his encounters with schools I am familiar with in Western Kentucky. Horrible (and hysterical) pranks are played- Corky is the victim of a terrible one himself. He is a member of some very exciting teams, including one that could almost be called perfect.

The second part of the book deals mostly with his baseball career. He has a long and interesting career in baseball, mostly in the minors though he does get to play at the highest level with the St. Louis Cardinals!

Characters you might expect pop up, including the Everly Brothers, James Best, Stan Musial, Hank Aaron, and many Kentucky basketball legends.

I want to mention again that the part covering Corky’s high school basketball days was much more interesting than I expected. The authors obviously did a ton of research into specific seasons, games, stats, etc.

This is easily one of my all-time favorite Kentucky sportsbooks.

“In the 1950s, Central City’s Corky Withrow was as big as it got. … His name took on rock star status, even to the point of upstaging two other local boys of notoriety, Don and Phil Everly.”

“UnCorked! tells the story of Raymond ‘Corky’ Withrow … one of the top five high school basketball prep stars in the nation, who in baseball was later tapped as the player to replace Stan Musial in the St. Louis Cardinals’ outfield. His story tells that, against all odds, dreams can come true!”

Former Evansville Brave Corky Withrow has chronicled his long journey through the minors, and a brief stop with the St. Louis Cardinals as the man who replaced Cards icon Stan Musial in 1963, in his new book UnCorked!.

Withrow details the hardships and adventures faced with playing for 15 minor league teams from his start in Evansville in 1956 and ending it with the Evansville White Sox in 1966.

One of the best dual-sport athletes in Kentucky High School history, Withrow also attended fall camp with the NBA’s Philadelphia Warriors in 1961. But, a wild lifestyle and fun-loving nature ended his career much shorter than many expected.